This year, POINT 2.0 would again be a host to many organizations from the Balkans that would present their work , projects and initiatives on the conference. 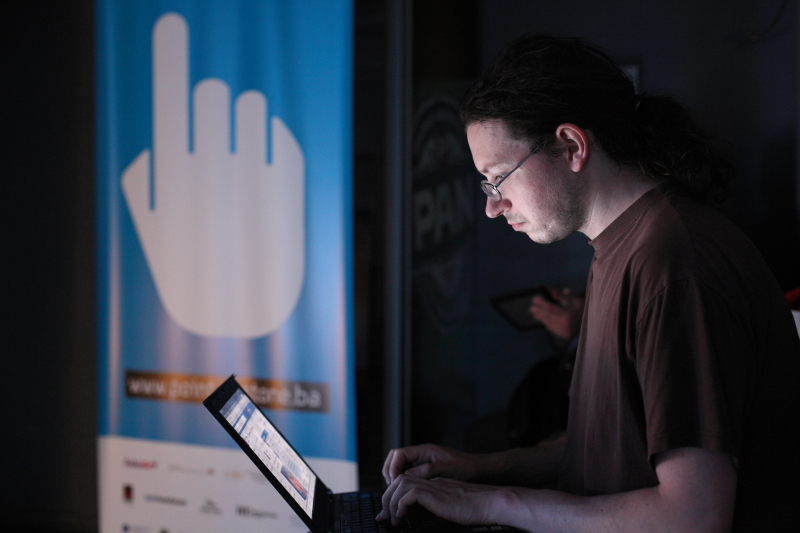 First session of the conference would give a chance to activist initiatives from BiH and the region that have managed to connect offline and online work and that succeeded, even though being of a different character,  in getting a lot of attention on the social media.

Within this session, young activist from Mostar Ivan Rozić would present an action called “Chocolate disturbances” that he has spontaniously started through Facebook as a responce to the clash of hooligans after the soccer game Croatia – Spain on EURO 2012. Representatives of the civil society organizations involved in the Coalition “Equality” would present the campaign “Budi građanin/ka – for BiH without discrimination” that is being implemented throughout BiH. Also, civic initiative “Park is ours!” from Banjaluka would be presented – this initiative has managed to gather people from Banjaluka in protest for several months in 2012.

Vukosava Crnjanski Šabović from CRTA Serbia (Center for Research, Transparency and Accountability) would present their project Open Parliament, as well as the project of monitoring public finances within local governments called “Follow the money”.

Srđan Keča, that has presented his movie “The Real Social Network” on last-year POINT, will present, together with his colleagues, present UZROK, a studio working on data vizualization. They would emphasise an ongiong project of vizualization of census data in Serbia.

Milica Begović from UNDP Montenegro would also be one of the speakers on POINT 2.0, while Center for Social Transition (CDT) from Montenegro and Mjaft from Albania would present themselves as the newcomers to the group of organizations implementing project Truth-o-meter in the region, that has before been succesfully implemented in BiH, Serbia and Macedonia.

Foundation Metamorphosis, that implements Truth-o-meter in Macedonia, would present their ideas on using new technologies for improving civic participation, as well as other actual projects they are implementing.

Finally, CA “Why not” (UG “Zašto ne”) would present its projects like crowdsourcing constitution in BiH – “Bolji Ustav”, online platform for reporting problems in the education system “Fix My School”, as well as other projects and future plans for the development of platforms for strengthening democracy.