The third panel of this year’s Point conference was moderated by Jelena Berković, and it opened up a discussion on issues related to disinformation, politics, civil society, as well as democratic development and societal development in general. This panel focused on how the pandemic has impacted tech giants and overall life regarding the influence that the platforms have on our everyday lives. 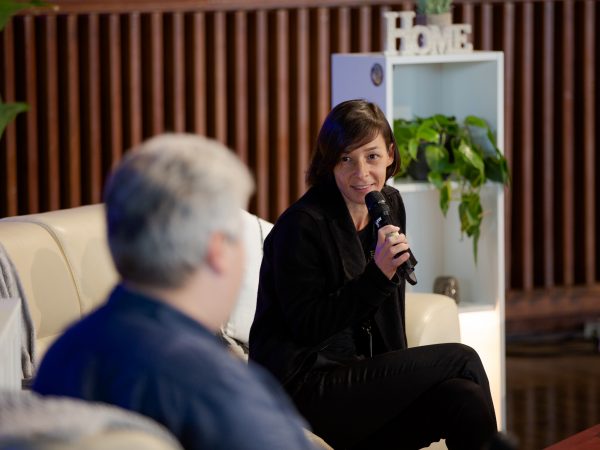 The third panel of the Point 9.0 conference, Big Tech Getting Bigger, focused on how the pandemic has impacted tech giants and life in general regarding the influence that the platforms have on our everyday lives. It started with an emotional explanation of why the Point conference indeed represents “coming home” for the moderator of this panel and advisor at Faktograf, Jelena Berković. The Point conference, in which she participated six years ago, is the very place where Faktograf was founded.

The panel discussion was opened with the question of what are the consequences of the pandemic on the fact-checking process and how have the platforms affected the information flow since the pandemic started. Maarten Schenk, a Belgian fact-checker who co-founded the USA-based fact-checking website leadstories.com, said that 2019, when Leadstories entered Facebook’s Third-Party Fact-Checking program “was a different time”, and that during the pandemic “people were literally dying because of something they read on social media”. This has put a lot of pressure on the Leadstories team, as he assumes it has on anyone who has been fact-checking claims that were spreading on social media platforms during the pandemic.

Carlos Hernandez-Echevarria, who oversees the public policy and advocacy operation of Maldita.es (a nonprofit media outlet founded in 2017, the premier independent fact-checker in Spain) said that misinformation on social media platforms became an “elephant in the room so big it was impossible to ignore” during the pandemic.

Panelists have agreed that one of the biggest problems is that Big Tech companies’ policies have a very “US-centric approach” to countering misinformation on their platforms which is “not working out for the rest of the world” since the majority of misinformative content that is being taken down from these platforms is content produced in English.

As Carlos said, that kind of approach is not only problematic when it comes to prohibiting or removing misinformative content – it is quite troublesome in their day-to-day work since problems that non-American fact-checkers face “rank very much lower” than the problems of those who counter misinformation in America.

As a frequent source of misinformative content, and a platform with a complete lack of action on trying to prevent the spread of misinformation, YouTube (or as one of the panelists said “a mutimillionaire company that is doing next to zero to counter misinformation”) was defined as a platform that should be the next focal point of the fact-checking community.

The conversation later moved to the wide-spread perception of removing misinformative content as censorship. Tijana Cvjetićanin joined from the audience, explaining how the platforms that have strict anti-misinformation policies have a worse reputation than those who aren’t doing anything. With this, she underlined the paradoxical counter effects of removing harmful content from social media.

Tijana also said that the 3PFC community doesn’t communicate enough that they are just partners of the Program, not a part of the company, and how that is something that should be better explained to the wider community of Facebook users. She also amplified that the much needed transparency of the fact-checking community could be a starting point for the community to require openness from the Big Tech companies in how content is being spread on their platforms (e.g. explaining their algorithms). She concluded that this positive action could result in making the process of countering misinformation easier.

The final part of the panel focused on the various regulations that are being developed to fight misinformation, which were concluded as “very good intentions going places”, but the panelists expressed worries that the final destination might be worse than the starting position.

The session was concluded with Darko Brkan expressing his view that more could and should be done by the fact-checking community.