Darko Brkan from CA “Why not” as a moderator started discussion with “What is the best environment for civic society projects?” 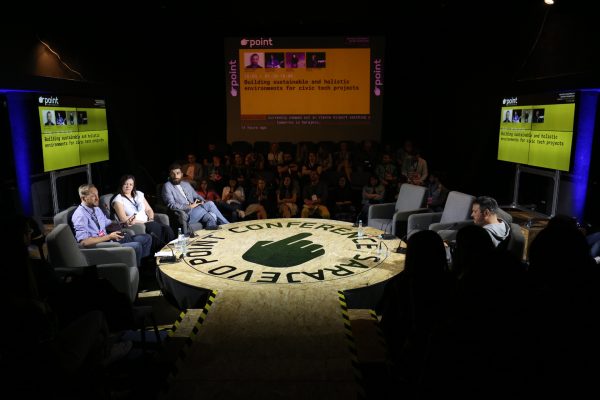 With the raise of complex technology and tools people want to try to get the most impact in a very short time, people from civic tech want to see impact immediately after releasing the tool. The main issue is that people usually focus on their own strength and not on what is needed by society. The other problem is sustainability of these newly created tools. Once they are out it is very hard to maintain numbers after some time passes.  Legal framework is equally important in setting up the right legal regulations for proper measurement for civic projects, however this heavily relies on the political environment and their willingness to change.

The big issue is the fact that it is very hard to find tools which fall in line with measuring success. It was stated that creating community is the best possible way to measure success of civic tech projects. The academic standard methodology measurements are hardly pressed by funders of projects, it still remains to see is this the best way to measure success of the project as well as will the practice be the same in five years. It is hard to say how to make sustainable environment.

The wave of transparency projects in Balkans started at around 2011, and it has become one of the major topic of civic tech projects. It is equally important to expand the civic community and educate new activists in order to stimulate the growth of the community. Political environments are also essential when it comes to civic tech projects and in each country how it reflects to the projects is different, and despite the resistance of the political elites, civil society organisations must preserve because they exist because of the citizens.