The panel participants shared the experiences with online platforms that serve as tools for establishing a two-way communication between the citizens and their representatives in the parliaments. 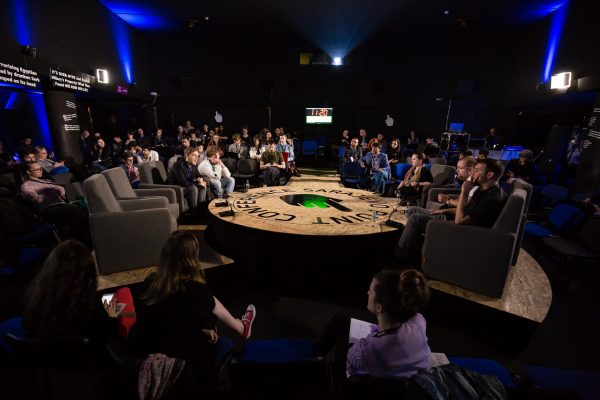 Citizen participation in decision making is important, and their direct representatives need to be accountable to them. Their mutual interaction was one of this Point’s topics, where today’s panelists presented the mechanisms to facilitate this communication.

Damir Dajanović shared the experiences from BIH, where the platform javnaraspava.ba (“Public debate”), developed by CA “Why not”, channels citizens’ communication with the MPs and gives them an opportunity to get involved in the legislative process. The platfom also informs the people about the work of parliamentary bodies on state and entity level, opens public discussion about the laws in current procedure and provides other tools, such as petitions and citizens’ initiatives that can be started through the website and directly reach the decision makers.

Jonathan van Geuns talked about the town of Almere, whose city council developed a portal with assistance from Innovation frontiers, used to inform the citizens about its work. The page makes all their documents, decisions and other materials, available for public insight.

The example from Slovenia, platform “Parlameter”, was presented by Žiga Vrtačić, who said that government data there is pretty open, but there isn’t enough of investigative journalism using the available information. He stressed that free sooftware and appropriate methodology is the key to the communication, with web design playing an important role to make the process more accessible, understandable and open.

Stefanos Loukopoulos, the co-founder and coordinator of Vouli watch – which promotes democratic principles and citizen participation through acces to information – presented good practices in Greece. He said that his country is one that “loves democracy, but where democracy is in deep crisis” because of frequent elections and the economic crisis. This, he said, was his motivation to create this platform. He emphasized the importance of access to information and using open data formats. The platform he presented informs the citizens on daily basis and opens a channel for them to address the parliamentarians, but also to compare the results achieved by different political parties.

Stefanos also presented a budget tracking platform, which follows all stages in the “life” of a budget, from its adoption to the final distribution of public funds.

The panelists concluded that open platforms, although they might seem idealistic, are the only solution and the digital technologies have to be used by both citizens and the governments in everyone’s best interest.