Smari McCarthy and Damir Dajanović presented two different, but similar approaches to promotion of civic engagement – one from Iceland and one from Bosnia. Smari spoke about his experience of creating online platforms for citizens engagement in Iceland, starting from 2007. 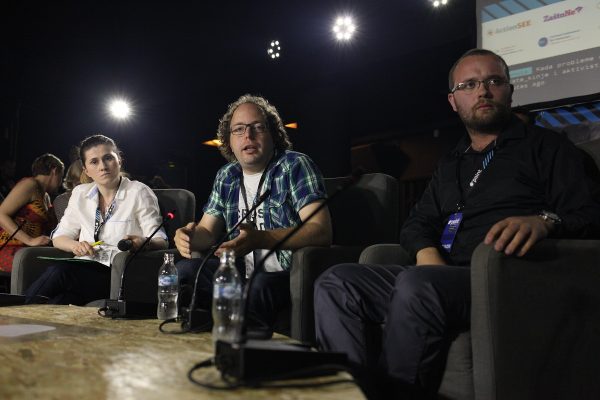 The aim was to create space for public debate and find ways to engage people. In Iceland, people got together through different online platforms and different projects,

“Democracy is something everybody cares about, but it is complicated and it takes the time to get into that. Often you do not have the energy to focus” Smari said, explaining the efforts made in Iceland.

The main motivation for activists in Iceland was how to move toward direct democracy in a real, effective way. As Smari said, the first step is to get rid of the existing voting system which does not promote real democracy. Secondly, there is a need to reduce amount of time people spend working, which will give them time to engage in politics.

Damir Dajanović from Why not in Bosnia presented the initiative Javna rasprava from Bosnia. The goal is similar to what citizens are trying to do in Iceland. Based on the research of Damir and his team, around 40 percent of laws in Bosnia are adopted without public debate. Their goal is to change this through the web platform Javna rasprava, where people can engage directly and ask the parliamentarians questions about relevant issues. The platform had over 100.000 visitors since October 2015, and was used to ask over 3.000 questions.