The session was started by Franak Viačorka showing two videos which were demonstrating the natural, cultural and other beauties and attractions of Belarus, as well as unusual advertisements showing how unique and unusual the organization of society is in the country. 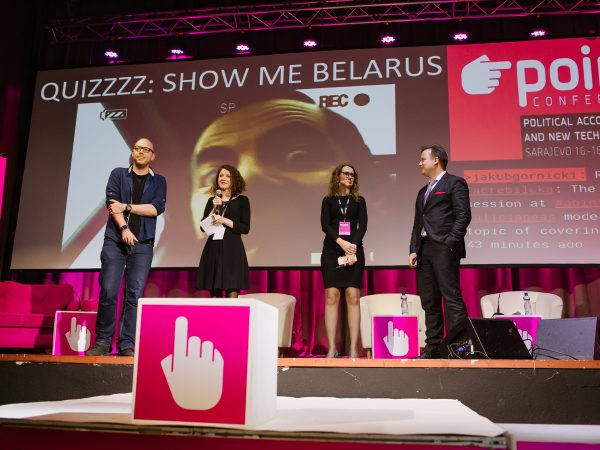 However, he continued with a series of pictures that seem entirely innocent, but are viewed as extremist in the Belarus society, with the intention of portraying the authoritarian rule of the Belarus government. The government of Belarus even criminalizes the possession of certain images that are not considered extremist anywhere else, such as an image of three teddy bears.

Veronica Laputska from East Center in Belarus/Poland, went on to explain why the image of the three teddy bears was considered extremist and illegal. What had happened was that a group of Swedish tourists illegally crossed the border via airplane, thus breaching the airspace of Belarus, and entered Belarus with slogans regarding defense of human rights and free speech, which the Belarus authorities considered absolutely abhorrent. The situation was so tense that the Swedish ambassador had to leave the country immediately and go back to Sweden. One of the tourists spent 35 days in KGB prison just for posting the photos online.

Hanna Ljubakova, a Belarus journalist explained that, at first, the authorities denied any of that happened, i.e. that there was nothing intruding the Belarus air space and that no one had been detained. She added that it often happens that KGB detains foreign nationals without any official information being published about it and it being denied because anyone can be considered a spy in the Belarus government. Hanna is a journalist in Belarus, and while working there, she had often heard from officials that they don’t want to talk to the media outlets, which makes the collection of evidence and publishing of fact checking materials entirely impossible.  The officials even refuse to give information to independent media outlets when they had already given the same information to state media outlets.

Franak Viačorka concluded that in Belarus, the major problems regarding censorship and internet control are pollicization of narratives and the influence of pro-Russian narratives. He stresses that the huge Russian influence is very concerning, with the most vulnerable groups prone to Russian influence being population with low media literacy, youth, Russian minorities, and supporters of far-right political ideologies.