The panel opened with a talk about the alarming situation in the Western Balkans. All countries in the region face the same problem – young people are massively leaving abroad, searching for a better future. What makes this problem even harder to comprehend is the fact that most of the countries in the region do not have official data on how many people are leaving every year. 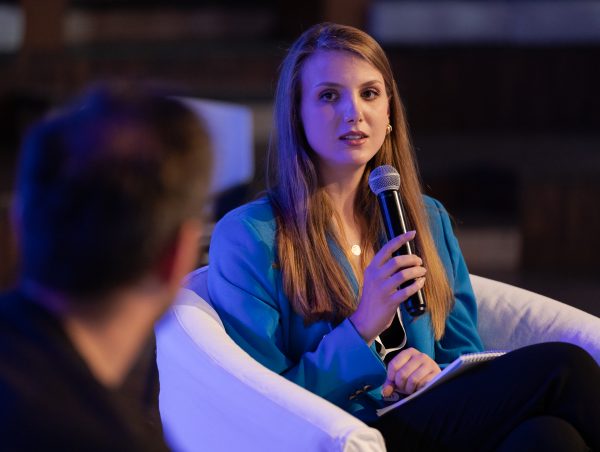 Bojan Blazhevski from the Meta News Agency talked about the devastating situation in North Macedonia. According to their census conducted in 2021, Macedonia lost 9.2% of its population in the last 20 years. Bosnia and Herzegovina and North Macedonia also share a problem of young people massively graduating from medical high schools in order to work as medical technicians abroad. Bojan said this problem should be fought by the government increasing the salaries, which would surely influence the young population to stay and work in their native country. He said that North Macedonia has some good demographic strategies, but the strategy activities are not conducted properly.

Gordana Radojević addressed the problems in Montenegro and noted that Montenegro was the first country in the region that held a census according to the European standards but is also the only country in the region that is unfamiliar with the date of its next census. Montenegro is also suffering from a massive brain drain, and data shows that if this trend continues, Montenegro will lose about 10% of its population in the next couple of years. Gordana said that the government should not fight against the migrations but create a clear and new demographic policy. Jasmin Hasić presented the results of the NFP study, which showed that around one-half of the young people want to leave Bosnia and Herzegovina and live abroad. He noted that young people said they don’t trust the state institutions and are leaving in essence because they are living their lives in suspense. Every part of a person’s life here is conditioned by previous accomplishments, which is not the case in more developed countries where young people can plan their future and actually save money. Jasmin stated that the government must change the normative setting in which they believe that young people reduce the country’s unemployment rate by leaving. He presented a couple of solutions, such as co-shared training experience between countries that could contribute to young people wanting to spend at least some part of their working lives in their native country. According to him, the best solution is to develop platforms for circular migrations, which he said have already shown very good results in some countries.

Andrea Mićanović from RYCO said that she read a study indicating that a person from the Western Balkans decides to turn their back on the Western Balkans every two minutes. She noted that the number of Montenegrins living abroad is the same as the number of Montenegrins living in Montenegro. She ended the panel discussion positively, saying that there are still young people who feel responsible and willing to stay and fight for a better tomorrow, including herself.