On March 4th, 2021, POINT Talks held its second live event to discuss the most recent elections in Bosnia and Herzegovina. Following a brief presentation on disinformation by the panel moderator, Emir Zulejhić of UG Zašto Ne, the event featured a three-round discussion among the following distinguished panelists.

Irena Hadžiabdić from the Central Election Committee of BiH, discussed the various impacts of the COVID-19 pandemic on the implementation of the elections in Bosnia and Herzegovina. In tandem with myriad obstacles imposed by late and insufficient budgeting, Ms Hadžiabdić explained the unique difficulties imposed by the pandemic on election administration and logistics. These included the provision of personal protective gear to poll workers and election observers, as well as the challenges of ensuring quarantined and COVID positive citizens were able to exercise their right to vote. Ms Hadžiabdić also discussed specific instances of irregular elections this year in Srebrenica, Doboj, and Mostar. She emphasized the growing importance of civil society actors in reporting violations and irregularities as political campaigning increasingly moves online. Without the resources to monitor the extensive political activities taking place on social media networks, central election authorities are increasingly dependent on outside institutions to call attention to illegal practices.

Lisa Reppel from the International Foundation for Electoral Systems, situated these challenges with the global context of democratic elections, highlighting low voter turnout, election postponement, lack of voter information, and insufficient funds for protective equipment and virtual training modules as problems that influenced elections worldwide in 2020. Additionally, she expounded on the implications of ‘fake news’ and disinformation on social media for the future of democratic society. She noted that while it is difficult to state the impact of this phenomenon on the outcome of individual elections empirically, the main threat posed by such operations are not to individual political parties or candidates but rather to the legitimacy of electoral institutions and the idea of democracy itself: “When we look at foreign influence operations and disinformation campaigns from Russia, China, Iran, and elsewhere one of the key pillars of those campaigns isn’t about changing votes from one candidate to another, it’s about undermining belief in democracy writ large.”

Ivana Korajlić from Transparency International in BiH, discussed the pandemic’s effects on political party financing and campaign funding. Although the pandemic resulted in lower general expenditures, Ms Korajlić noted that these expenditures were still consistently underreported by political parties and featured significant increases in financing for online campaigning through social media and advertising. During this election cycle, the abuse of state resources tended to revolve around the health sector, including campaigning in hospitals and the distribution of medicines branded with party slogans. These represent only some of the violations reported this year—only 50 of which resulted in fines for political parties and candidates. Other incidents recently reported incidents, many of which went unpunished, included hate speech, threats, and distributing money in exchange for votes at campaign events. Ms Korajlić described how the unwillingness of the judiciary in BiH to confront these issues ahead of official campaign seasons sets a dangerous precedent for future elections.

Dario Jovanović from the Coalition for Free and Fair Elections (Pod Lupom), expounded upon the legal irregularities witnessed in the most recent elections, including widespread voter intimidation, illegal trading of polling committee memberships, and early campaigning. Mr Jovanović also highlighted a lack of accountability for major instances of election fraud. More than 3,000 votes were stolen during the Mostar elections alone, and the widespread use of voting by mail this year resulted in more than 5,000 cases of data theft and fraudulent voting. Insufficient election observation, exacerbated by the circumstances of the COVID-19 pandemic, contributed to these irregularities. While more than 2,800 observers were present at polling stations across BiH on the election day last year, many more were discouraged by travel restrictions, inadequate protective equipment, and concerns for their health and safety.

Danira Karović from CA ‘Why Not’ (UG ‘Zašto Ne’) described several trends which she observed in the course of the elections. These included trends in the upholding of campaign promises among local and state officials, as well as the pervasive practice of paying lip service to transparency as a political value whilst neglecting to take any concrete action towards creating a more open and accountable political environment. Ms Karović also described the phenomenon of the generalization of local elections, in which local candidates emphasize issues well beyond the scope of their jurisdiction or wholly irrelevant to local elections in order to gain political support. Common narratives include canton-level disputes, NATO integration, and the powers of the High Representative, as well as the repeated emphasis on candidates’ own wartime affiliations and those of their opponents.

This edition of POINT Talks also featured the video “Going Local for Local Elections: Working with Youth Throughout BiH,” where civil society activists Merisa Okanović (OP Revolt), Milica Pralica (Oštra Nula) and Ajsel Kaniža (ASU BiH) gave insights into challenges related to youth civic and political participation in the country. This presentation was followed by a final discussion of what key elements in the political process need to be changed in order to ensure more free and fair elections in Bosnia and Herzegovina. The panelists agreed on a number of crucial measures including greater utilization of information technology and electronic voting, ensuring the independence of various institutions, and extensive reform to legal frameworks governing the behaviour of political parties and candidates and sanctioning abuse of state resources. 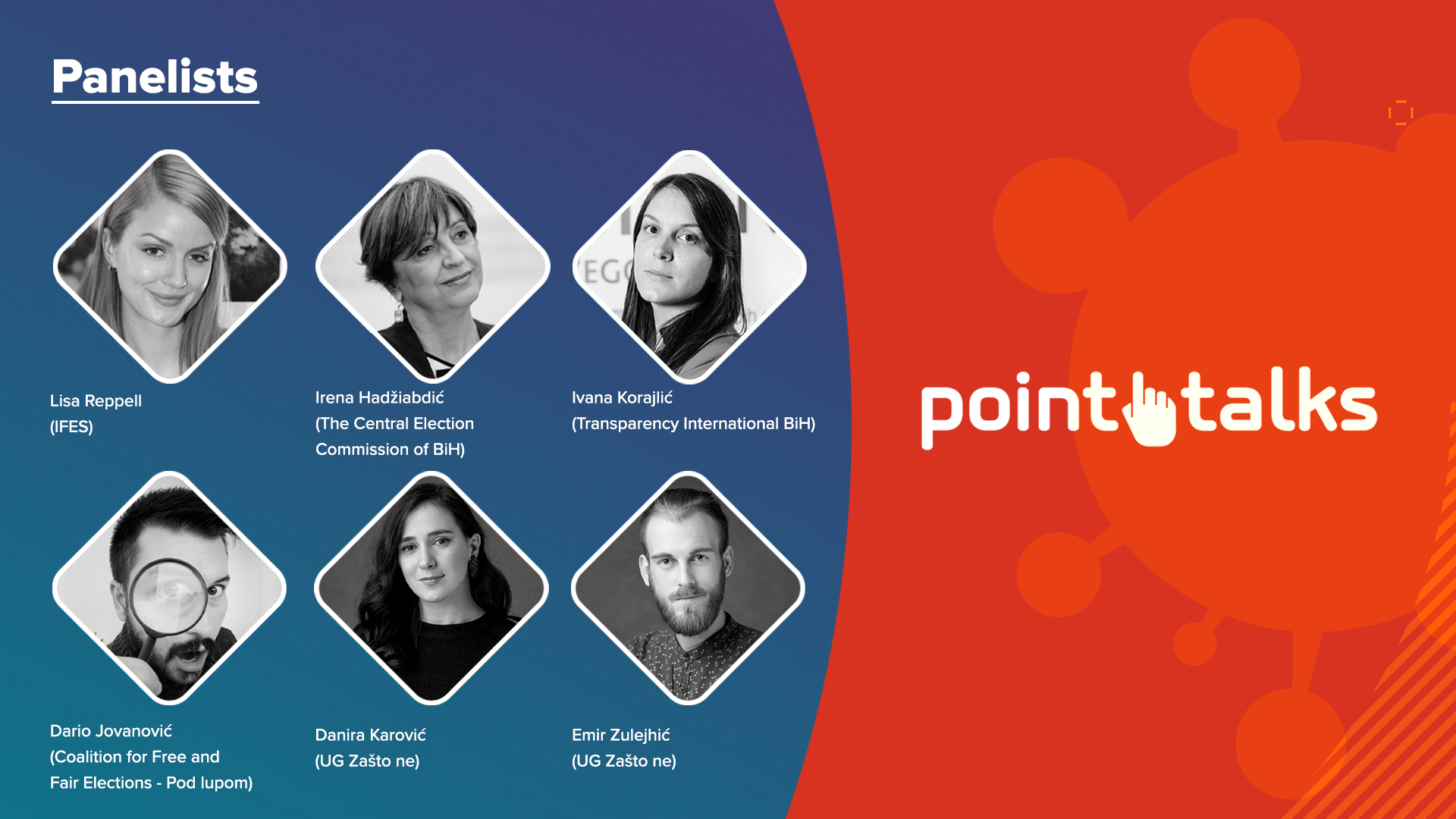