The fourth panel, moderated by Tijana Cvjetićanin from CA “Zašto ne”, hosted a very engaging discussion about the issues with communicating scientific facts in the time of the pandemic. The panelists were Jelena Kalinić, a biologist and science journalist from Bosnia and Herzegovina, and Almir Aljović, a neuroscientist currently pursuing PhD in Germany and the owner of science YouTube channel “Znanium”. 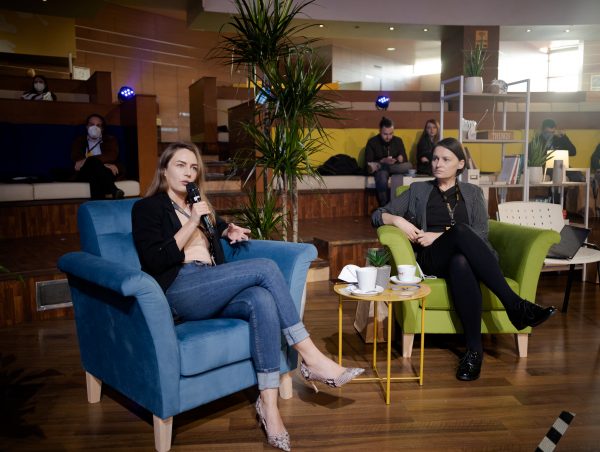 The session was opened by the moderator Tijana Cvjetićanin who invited panelists to introduce themselves to the audience. Jelena Kalinić, who was also present at the Dom mladih, shared her personal story on how she became a science communicator. As a person with a background in both science and linguistics and not being able to pursue her career as a biologist or scientist, she seized the opportunity to write about science in the format of blogs. That is how the Quantum of Science blog was launched in February of 2015.

The spread of disinformation about vaccines prompted her to venture into another project – a website Vakcine.ba, where she started publishing articles on facts about vaccines, as the misconceptions on vaccines were appealing to a lot of supporters in B&H long before the Sars-CoV-2 virus outbreak.

Almir Aljović joined the panel via Zoom platform from Germany. He showcased his backgrounds in psychology,  genetics, molecular neuroscience and neuroimmunology. He is currently a PhD candidate at the Ludwig Maximilian University of Munich, and he also works at the Institute of Clinical Neuroimmunology Biomedical Center at the same university.

Although Jelena Kalinić was communicating science before the Covid-19 pandemic, Aljović stressed that his decision to start a science YouTube channel was provoked by the fake experts who went to talk about science in the time of the Covid-19 pandemic – clearly without any knowledge or expertise about it. Through Znanium, he managed to satisfy his passion for two things –  science and filmmaking.

Disinformation about vaccines is not a new story, and it is not something that is only related to the current pandemic. Earlier, it was the Diphtheria vaccine, then MMR and now Covid-19 vaccines – The same narrative keeps repeating.

Then Tijana opened the discussion by pointing to Aljović, who mentioned Branimir Nestorović, a prominent disinformation spreader from Serbia who is an actual pulmonologist and to whom people from the region, given the credentials, trust on the topics related to the Covid-19 pandemic.

Jelena Kalinić followed up and acknowledged that “experts gone wild”, as she phrased it, is one of the most frustrating things she encountered in her career. These “experts”, such as Branimir Nestorović, French Nobel Prize laureate Luc Montagnier or prominent ivermectin promoter Rayan Cole, are people with medical or even scientific backgrounds who had “gone wild” in the time of pandemic and started spreading unsubstantiated claims regarding the virus, cures and vaccines. Aljović said that what we lack in the region is the system of punishment for those people, as they bear no consequence (such as loss of the license) for the spread of misinformation.

By spreading such claims, these people are speaking from the position of authority as those who have people’s trust, these “experts” boosted their popularity on the one hand, but contributed to hesitancy and prolonged the pandemic on the other. According to Almir Aljović, trust is one of the crucial factors for understanding how these people get so much attention. “If we trust a person spreading (dis)information, we trust the information that person shares,” said Aljović.

Although most of the disinformation celebrities got attention thanks to the internet, some of the abovementioned individuals received significant media time as well. That is why false balance in the media was discussed too. It was pointed out that the media contributes to the spread of disinformation by treating pro-science and contra-science interlocutors in the same way. So, the illusion of “balance” between these two narratives exists, when in reality, a pro-science person represents the majority of the scientific community, while the former represents a meager percentage of anti-science promotors.

Speaking about “famous disinformators”, Jelena Kalinić pointed out that they tend to manipulate people’s primal emotions, and that is one of the reasons for their “success”. Science does not use that type of language to communicate the facts, and one way of going around this problem might be to make science communication more receptive to people.

Another genuine problem with people having an inclination towards believing in science-related misinformation lies in systemic failures, primarily in the education system. Aljović said that failure in teaching logic reasoning has major consequences in that regard. Tijana Cvjetićanin added that the evident absence of understanding of the scientific method, especially the study’s replicability, is again the education system to be blamed.

The founder of the Znanium channel clarified some of the misconceptions about science as such. Namely, he emphasized that there is no such thing as a 100% consensus on anything. Instead, there is a scientific consensus which is the best thing we can get. Jelena added that a bunch of misinformation is based on preprints, so without it being peer-reviewed and published, it cannot be considered as hard evidence in science.

However, the issue with the use and interpretation of scientific research is much deeper than that. Jelena pointed out that due to the extreme specialization of the scientific disciplines, scientists from one discipline can hardly go through the writing from other disciplines – let alone a layman. Being unable to distinguish good from bad science by non-specialists and journalists also contributes to the spread of unsubstantiated stories.

The audience got involved in the panel too. Questions were raised about who should be in charge of fact-checks of science disinformation and to what extent the state should be involved in the process. Given the fact that people in the region of former Yugoslavia generally lack trust in governmental institutions, Jelena Kalinić emphasized that state institutions should rather be opted out from it. Science, in her opinion, contains fact-checking through the instrument of peer review, and that should be used as an instrument.

Prompted by the question from the audience, Aljović explained that the strategic spread of science-related misinformation online is incentivized by financial profit and political gains. As he put it, “almost anything can get politicized online, including vaccines”. Tijana added to this that financial profit is a very present drive behind the spread of disinformation, as the case of marketing of alternative healing products is something we as fact-checkers very often come across.

In the end, Tijana raised the question of whether we in the region of the Western Balkans do have a science community that is able to communicate with the broader public. Aljović emphasized that although we have very good scientists, we lack institutes, government support and grants to support science. The lack of resources is what creates a trap for scientists in their attempts to do real science, but the end result is very poor, he concluded.