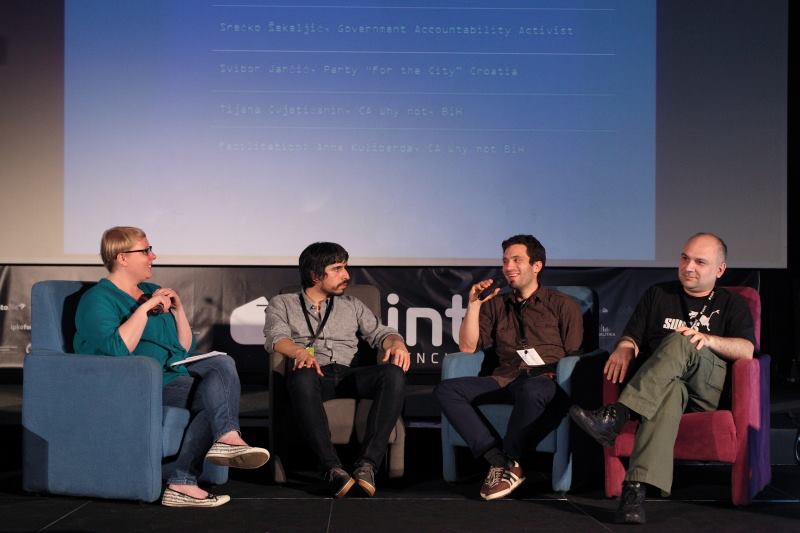 On the first day POINT 3.0 conference a panel discussion named “Let’s forget flyers: Privacy in the Digital Age” was held. The participants were Marko Rakar of the Windmill Association, Svibor Jančić from the For the City Party from Croatia, and Srecko Šekeljić, activist from Serbia. The panel was moderated by Anna Kuliberda from CA “Why not” from Sarajevo.

At the beginning of the discussion Svibor Jančić said that new media opens the door for people who want to get involved in politics and be elected.

“It  is much easier to reach people through new media  and you don’t have to have a lot of money to make​ ​a local campaign and enter into a small political arena. However, new media gives  the impression that you are doing something if jou just like or  share something. There is always a debate about how many likes you can convert into votes, “said Svibor.

Jančić said that For the City Prty had 13,000 Facebook likes  and it won 12,000 votes in local elections, but in order to achieve this result they had to go out in the streets.
“There must be a link between Facebook, Twitter and people in the streets,” said Jančić and described some of the activities that are carried out in the streets to attract supporters and voters.

Srećko Šekeljić said that at one point in time there was strong use of social media by politicians in Serbia and that they all opened twitter and facebook accounts, but then a strange thing happened.

“In Serbia, for example, a party that is currently in in power, which is a radical party, became a party that invests most in promoting their goals through social networks. They have a web team that aims to spin public opinion online.

They already have the support of traditional media, but with a massive web team they are now trying to control the Internet, “said Šekeljić and added that on one occasion  communication between the team emerged, in which they admitted they are responsible for over 70% of user comments on sites of leading Serbian news portals.

Marko Rakar says, in the conducting of political campaigns negative facts about the opponents are used all the time and it is usual to run a “negative campaign”, but in the campaign, he said, we must never lie.

In terms of the tools used for the campaigning through social networks Rakar stressed the great importance of their use in connecting with voters and the monitoring of voters.

“Most of the comments are not dangerous but sometimes you have some that may be the beginning of a story in which you have to have an answer. That is how you can trace influential people on the Internet, “said Rakar and added that in his opinion, negative comments on social networks are potentially more dangerous than comments on websites.

Rakar also emphasized the importance of targeting the audience and of ways to reach out to each target group in a specific way which for him is a matter of knowledge.

“There are books and books written on the subject and those things are very easy to learn,” said Rakar.

The dilemma over whether to run a traditional campaign or include social media in it is a choice of the candidate.

“If you look at, for example, Croatian President Ivo Josipovic he really enjoys using social media, and if you wrote to him and got a response, you know it’s really him. On the other hand, many other candidates don’t see a sense in personally communicating with the citizens, “says Rakar.