About media literacy and fact – checking in the Italy and world we talked with Gabriela Jacomella, a journalist who worked close to ten years at Corriere della Sera (with a break for a fellowship at the Reuters Institute in Oxford) before quitting her job and moving to South Sudan in order to train local journalists. 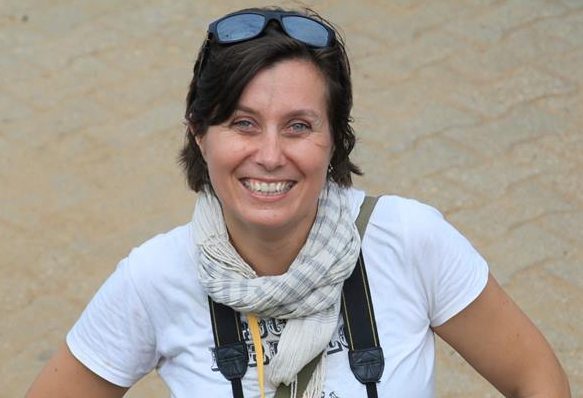 At POINT 7.0 she will be participant of panel discussion “The HowTo’s and HowNotTo’s of Media Literacy”, second day of the conference from 11:30AM.

I should perhaps explain that Factcheckers.it has a peculiar approach to the fake news issue: we do not produce original fact-checking, but rather focus on dissemination and training of fact-checking tools. We were specifically born out of a desire to give everyone – young and old, educated or not, with an interest in journalism or simple readers/viewers/users – a chance to learn the basics of verification, in order to better navigate through the huge amounts of information we are almost swallowed by on a daily basis, and also in order to sensitise them, so that less and less people would contribute – by absent-mindedly sharing or even creating them – to the proliferation of “fake news”.

We are a small association, spread throughout Central and Northern Italy. We work mostly remotely, with physical meetings every odd month. Each one has a specific sector – such as social media verification, gamification, research… – and each one follows mainly one line of action and intervention. We have recently realised that our geographical distribution doesn’t facilitate the follow-up to the many requests we receive from schools (which most of the time don’t have much funding to cover our travel expenses…), so we decided to focus more on tools that teachers and trainers can use independently, such as discussion games or card games. And this is what I will be presenting at Point, too!

What is the biggest challenge of fact checking in Italy and world today?

The biggest challenge in my opinion- both in my country and in the world – is probably an idea that has started to spread and to replace the “fact-checking craze” of some months ago; according to this view, fact-checking is a somewhat useless practice, because it might not reach the same people who fall prey of disinformation/misinformation. Personally, I believe that fighting what Claire Wardle and Hossein Derakhshan called “information disorder” is a necessary albeit long and not at all easy process. And it is very important to make people understand that fact-checking is not the silver bullet, but rather a part of a more systemic approach.

Today we have a lot of channels for spreading important information, but also, we have opened a space for misinformation, especially through the social media. How can we improve the understanding of media content by ordinary people?

Two key approaches: more media literacy, with a focus on digital tools, and more sense of responsibility and self-criticism on the side of the media themselves. Media literacy should become a staple of school curricula; it should become compulsory, and there should be an investment in tools, training, strategies. Which is something that so far has been very inconsistent, leaving the teachers alone to face what can be described as a huge cognitive revolution. And the media should be more willing and ready to admit that they are themselves part of this information disorder. They should create a common strategy to try and rebuild the trust connection that has been eroded along the last decades. We cannot blame social media only for this wave of disinformation. All media outlets have a part to play, and sadly, some of them are just jumping on the information disorder bandwagon, making our efforts even more complicated.

What do you expect from the POINT conference, and what can POINT audience expect from your talk?

I have a lot of curiosity and am very excited to be part of this year’s Point. I expect to exchange experiences, points of view and strategic approaches with people who share my same concern about the state of democratic debate and civil society engagement, and who believe media literacy is one of the tools we should implement and improve in order to address the trust decay issues our societies have been facing over the last decades. On my side, I will try to present the audience with some new data and research results on the state of media literacy in Europe – some academic stuff before moving into more practical terrains, such as: what do we at Factcheckers.it do in order to improve educational fact-checking and critical thinking teaching in our (and maybe, who knows, your) country?