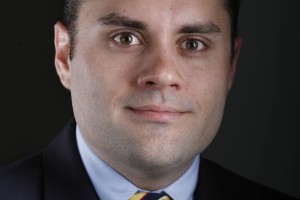 Aaron Sharockman is editor of PunditFact, a website dedicated to checking claims by pundits, columnists, bloggers and the hosts and guests of talk shows. Prior to that, he served as Deputy Government & Politics editor for the Tampa Bay Times and an editor and writer for PolitiFact. He has been a government and politics writer with the Times since 2003. Sharockman is a graduate of Indiana University.

PunditFact is a project of the Tampa Bay Times and the Poynter Institute, dedicated to checking the accuracy of claims by pundits, columnists, bloggers, political analysts, the hosts and guests of talk shows, and other members of the media.
We define a pundit as someone who offers analysis or opinions on the news, particularly politics and public policy. One can engage in punditry by writing, blogging or appearing on radio or TV. A pundit is not an elected official, not a declared candidate nor anyone in an official capacity with a political party, campaign or government.

PolitiFact is an independent fact-checking journalism website aimed at bringing you the truth in politics. PolitiFact’s reporters and editors fact-check statements from the White House, Congress, candidates, advocacy groups and more, rating claims for accuracy on our Truth-O-Meter. Every fact-check includes analysis of the claim, an explanation of our reasoning and a list of links to all our sources. PolitiFact tracks President Barack Obama’s campaign promises on our Obameter. PolitiFact won the Pulitzer Prize in 2009 for its fact-checking of the presidential election.