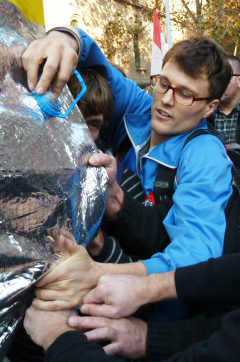 Artur van Balen (Berlin, Germany) works at the crossroad between art and activism. His passion lies in creating bulky inflatable interventions in public space to create visibility in the media. Artur  works in close relationship with different envronmental- and social justice groups and is the founder of the art-activist group eclectic electric collective (e.e.c.) and the online platform www.toolsforaction.net.

The workshop will be held in english and b/s/c

As artists and activists, we combine the imagination of art with interventional politics of DIrect Action to explore new tools of creative resistance. Among such tools are inflatables as multifunctional props for protests and actions. Poetic and weightless, the crowd carries the inflatables as the inflatables carry the narrative of the protest in the media – Do It Yourself-ethic, radical statements, coated in colourful humour.

One such an example is the 12 meter inflatable hammer, used to protest the policies of the United Nations Climate Conference in Cancun, Mexico (2010). Carried in full view of the press, the sculpture was ripped to pieces by the mexican police. Within hours the image of the sculpture was declared the symbol of the international climate movement, and travelled across TV channels from Mexico to the US to United Kingdom and Germany. Other examples of inflatable protests are inflatable cobble stones at the 1th of Mayprotest in Berlin(2012), the inflatable Hungarian Orange against right wing government in Hungary (2012), and the inflatable slipper for women rights in India (2013).