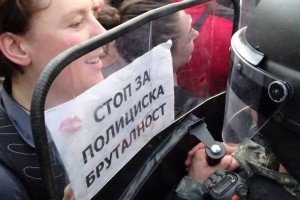 Biljana Ginova is a human rights and LGBT activist and an active member of the civil society in Macedonia since the late 90’s. In the past decade and half, she has advocated for minority rights and has devoted her work to strengthening different marginalized groups as well as to empower different activist groups and grass-root organizations. She is co-founder and member of couple of activist’s initiatives: Stop for Police Brutality and LezFem. In December 2014 she joined AJDE! – Platform for Civic Action and since January 2015 she is in its Coordination Body. Ajde! is a platform that gathers free minded individuals with one common aim to bring back the decision making power in the hands of the citizens of Republic of Macedonia.