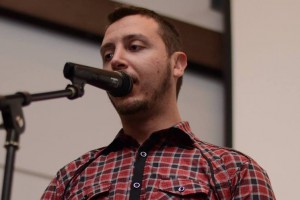 Gjorgji Pulevski is a student at “Slavjanski University” with major in physiology and a political activist from the Leftist Movement Solidarnost.  He has been involved in numerous grassroots initiatives concerning labor and social rights. Furthermore, he took important part in the “Studetski plenum”, the movement that brought the democratic awaking in the Macedonian society.

Pulevski has been actively involved in the organization of the student uprising and occupation of the universities. His contribution was most valuable in the coordination of the “Studetski plenum” between Skopje and Bitola.

Currently he is the main coordinator of the debate cinema “Kontra kadar”, a project that is essential for creation of a democratic culture in Bitola.