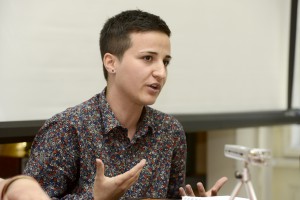 Jelena is one of the founders of Vojvodina Civic Centre, where she currently works as community manager.

She also works as researcher on project Untold stories which is dealing with human rights violations on the territory of Vojvodina during 90’s. Collected results are presented on web platform neispricaneprice.com that is unique database about human rights violations in Vojvodina in this period. Jelena is working on collecting, editing and publishing data on this platform.

She coordinated project Objectively better which was one of winners on Balkan challenge in 2013. This project was about mapping hate speech graffiti in Novi Sad using android app and web portal, with goal to make it easier for city’s communal service to remove them. This project influenced the Mayor of Novi Sad to form official Anti graffiti unite with task to remove hate speech graffiti.