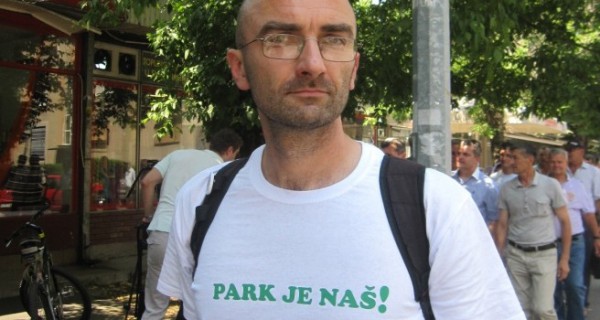 Miodrag Dakić is one of the co-founders of “Centar za životnu sredinu” (Center for environment) from Banja Luka and is also a long-term project coordinator for Energy and Climate Change. He has been active in various campaigns and civic initiatives. As part of the protests under the initiative “Park je naš” (Our Park), he was often involved in giving media statements which erroneously labeled him as the leader of the protests.

During the month of May 2012, citizens of Banja Luka spontaneously gathered to voice their protest against the destruction of a town park, since then the initiative “Park je naš”, has developed as a model of a civic action and revolt.

The public initially gathered in walks around the city to protest local urban policies, however the movement grew and evolved in challenging the entire power structure in Banja Luka and Repulika Srpska through a series of humanitarian action in which the public walks expressed a high degree of solidarity with marginalized and disempowered citizens. On the eve of the 2012 local election campaign, civic initiative “Park je naš” released a declaration which represented a first step in articulating goals of civic movement and awareness in Banja Luka.