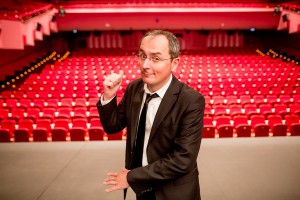 Pedja Bajović is an OK guy. The fact that he is writing about himself in the third person is not very helpful for you to believe that he really is an ‘OK guy’, but OK…

He is a somewhat proud owner of long-lasting and eventually cured professional identity crises. In his four plus decades of living, this man was an air force cadet, journalist, radio host, humanitarian officer, public officer, activist, interpreter, manager and more… and it all led to the final outcome of him being a producer and a stand up comedian. It has lasted since 2005 and is still rolling.

Montenegrin born, Serbian raised, he spent most of his life in Bosnia and Herzegovina and is now a citizen of Croatia. In a nutshell, he is – a Yugoslav. His Master’s Degree in Communications from Ohio University makes him show off more than necessary. Nevertheless, people manage to survive this display of innocent bragging. What is less innocent is Pedja himself. The proof he did “it” at least twice are two beautiful daughters brought to him by his wife, a true pillar of the house. Otherwise they would live in a tent, and a leaky one for that matter

In the meantime, he has had over a thousand performances in more than a dozen countries, both in the Balkans and overseas. He is the first stand up comedian from this part of the world to participate in the prestigious Seattle International Comedy Competition 2012. Did he make it far? Are you kidding?! You must be a comedian yourself! No? Then do not joke about it! Pedja is a bit touchy on that subject… He produces stuff and tents to be the first in it in this part of the world: a first ever DVD edition – a box edition for that matter! (2011), first cross-border comedy tour (2012), first national tour in Croatia (2009) and in Bosnia and Herzegovina (2012) etc… Yeah, it’s better to bi right than first, but this guy was – the first!

As for his comedy style, Pedja Bajović is somewhere between Jack Dee and Louis C.K.. Although his eyes (eyeglasses included) are a constant observational tool and his index finger is always ready to point, he somehow constantly returns to his favorite subject – himself.  He tends to be a dry one, but is working on more expressive ways, such as dancing on stage. Apparently ladies dig it.

IIn terms of producing, he is one of the founders of the Croatian and Bosnian stand up comedy scenes and a strong participant in the development of the regional scene, which covers the whole of former Yugoslavia, where all nations now either speak or at least understand the same language, even though it now has four different names.

Pedja’s club is titled Komedija s nogu which is for sure the clumsiest translation of the English term ‘stand up comedy’, but they had to name it something! This club offers four comedy nights per week and it also welcomed some of the great international names in comedy, such as: Ian Stone, Peter Greey, Ava Vidal, Magnus Bentér, Marcel Lucont, Jesse Joyce, Adam Bloom, Andre King, Daniel-Ryan Spaulding, Feraz Ozel, Anthony King, Damian Clark, Noel James, Jimbo, and more.

Toldya, Pedja is an OK guy.