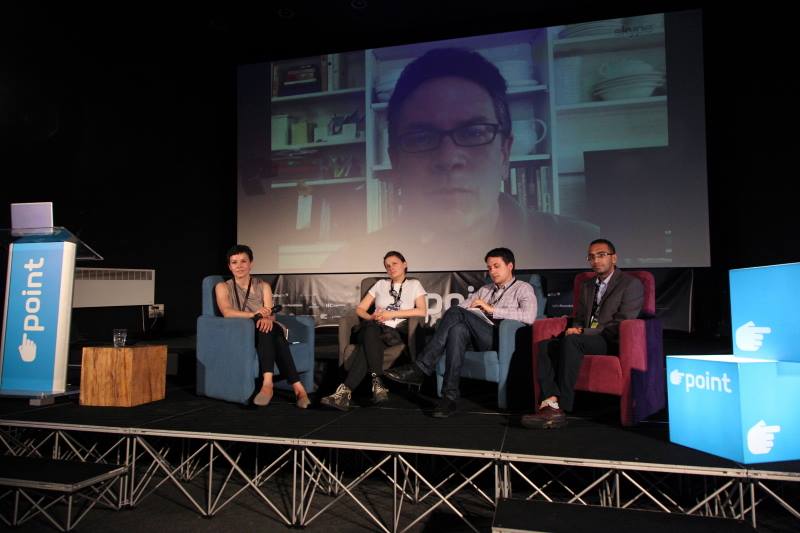 Panel discussion on the topic of “How truth effects the elections,” brought together representatives of civil society organizations engaged in the analysis of the fulfillment of election promises, given by the parties in power. The panel was attended by Abbas Adel, the initiator of the project Morsimeter from Egypt, Tijana Cvjetićanin Istinomjer Coordinator in Bosnia, Dusan Jordović from CRTA Serbia, an organisation implementing Istinomer  project in Serbia and Bill Adair from Politifact organization, which started the Truth-O-Meter project in the first place. The panel was moderated by Ivana Cvetkovic-Bajrović from National Endowment for Democracy.

At the beginning of the panel Bill Adair talked about reasons which generally led to the launch of Truth-O-Meter in 2003 and 2004 via Skype. At that time, a military campaign in Iraq was launched, he presidential election was approaching, and in such a situation media did not du much research on the results of the Bush administration.

“I personally, as a journalist, felt responsible for the fact that not much has been done on the analysis of the previous mandate of President Bush. Then I suggested we launch a ‘fact-checking’ web site, “said Adair. According to him at that time there was a site Factchecking.org, but his idea was to create a page that will be more accessible, but also empower reader’s texts.

Politifact expanded this project to Australia, but it also made ​​a tool for fact-checking reports in the media. It is interesting that the Truth-O-Meter project subsequently spread around the world, and Adair said that he himself was surprised when he discovered how many projects on a similar principle exist.

Adel Abbas stressed that Morsimeter was launched in Egypt the same day after the election results were published in this country. The same day, the project has experienced great popularity and spread in the media and through social networks, and in 24 hours site has had over 1 million visits.

“This was the first time that someone could track what president in Egypt is doing, which was a great novelty. After that, we were contacted by the President himself who said that he would share information with us, ” said Adel. The project was limited to the first 100 days of government of the newly elected president.

“We had evidence for everything we wrote, for all the president’s promises that we analyzed and Morsimeter influenced the emergence of similar projects across the Arab world,” said Adel.

Dusan Jordović talked about Istinomjer in Serbia, and pointed out that politicians are not too worried about the writing on this site.

“In many cases politicians reacted to our articles by accusing us of being mercenaries of other parties,” said Jordović and emphasized that the goal of this site in fact to prevent the culture of forgetting, which is very present in this region, so that the statements made by politicians, as well as their attitudes, can be found in one place even after several years.

“On our site you can find different ratings for different political parties which in fact is an objective evidence that we are doing our job,” said Jordović.

Tijana Cvjetićanin pointed out that Istinomjer  in BiH  gets  media coverage when it holds a press conference presenting the results of the analysis, but that the media are not so much interested in themselves going through the site, and that it’s in some sense necessary to provide them with information to publish.

“However, given that we now exist for over four years, the media increasingly contacts us for statements and assistance in their research, but I am under the impression that searching the site and looking for data is not that common among them ,” emphasized Cvjetićanin.