The first panel discussion of Point Conference which has put in to perspective over Institutional Openness and how to properly do regional benchmarking. As a speakers at opening panel of conference there were Aida Ajanovic from CA Why not, Pavle Dimitrijevic from CRTA, Vullent Kabashi as as IT Director from Parliament of Kosovo​, Blerina Ramaj from Open Data Kosovo, this was all moderated by Dušan Malenkovic. Aida talked about openness of institutions towards citizens, as well as how to do benchmarking in region. She talked further about how they developed indicators and baselines, using EU recommendations and Eu directives, as well as good practices. Aida said that they measured openness 2 times once in 2016, and 2nd time in 2018. This system was built in order to use recommendations towards the institutions in order to help them to increase the openness. There are slight difference in countries, furthermore she said that most institutions treat openness as ad hoc, with no established policies and practices. 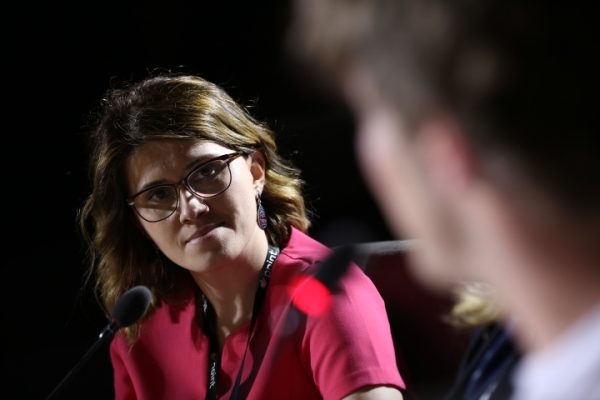 One of main recommendations which came to during these two tests was that institutions are not aware of the problem and furthermore they do not know how to improve the situation.

Pavle talked about Open Government partnership program, about difficulty in the region of implementing this program. Pavle further stated that more then 30% of citizen questions are not responded whatsoever by institutions in Serbia. He stated that it is very difficult to provide partnership between citizens and government. Citizens in this state of things are becoming furthermore passive and not wanting to participate in local activism. Pavle stated that there is need of citizens to involve themselves in activity in their local municipalities, and to put pressure on government elites in order to make institutional openness better.

Blerina from Open Data from Kosovo stated that Kosovo Parliament is doing great efforts to improve the openness. All of the legislative acts can be seen and are available for citizens. She stated that forum for transparency is a step in the right direction, however she stated another problem related to openness within parliament and that is accountability. MPs are protected by law, and a lot of them do not attend sessions of parliament, and there for there is no quorum. This creates a status quo where Mps are getting paid for not doing their work. Furthermore she stated that only Mps themselfs can change this provision which allows them to not attend Parliament sessions for 6 months without penalty. In the past 5 months only 17% of legislative plan has been adopted by parliament of the Kosovo.

Goce from Metamorphosis Foundation, said despite depressive situation in the region in regard to transparency, there are positive examples and initiatives. Almost every institution participates in final index of openness benchmarking. Institutions were not prepared for questionnaires from the civil society. There was an obvious resistance during first index benchmarking. However when the political change happened in Macedonia last year small changes started to happen. The newly elected mayors were happy to participate in benchmarking index, furthermore there was a declaration signed with 13 mayors in municipalities of Macedonia. They wanted to see how they measure up compared to previous political settings. However this is only one good example, the higher institutions such as Ministries, still have a lot to do in the field of openness in order to improve overall situations.