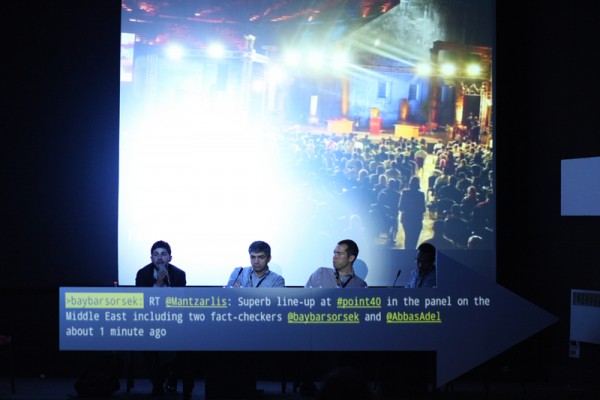 At a panel discussion on the Middle East panelists were Dana Sofi (Reform Institute for Development) from Iraq, Baybars Örsek (Association of dialogue for a common future) from Turkey, Sami Hourani from Jordan, Abbas Adel (GlobalMeter.org) from Egypt, and the panel was moderated by Haytham Mones (Globalmeter), also from Egypt.

Abbas Adel of Egypt in his opening speech said that he doesn’t have answers to all questions, and he showed a comic video clip of a jumper with a stick, who falls on the starting point of the jump, which, according to him, gives the best answer to all questions, in just 6 seconds.

Considering that in recent times does he not live in Egypt, Adel gave an intersection of media headlines.  He said that militant government is currently in power in Egypt, after so-called elections last year.

Adel is known as a founder of Morsimeter platform which dealt in factchecking  and checking the fulfillment of the promises of the deposed President Mohamed Morsi, who was recently sentenced to death.

“Now we are being asked to create CCmeter, but we can not because we do not have the media on our side, and it’s potentially dangerous, because the army controls everything, and we could not do such a project,” said Adel. 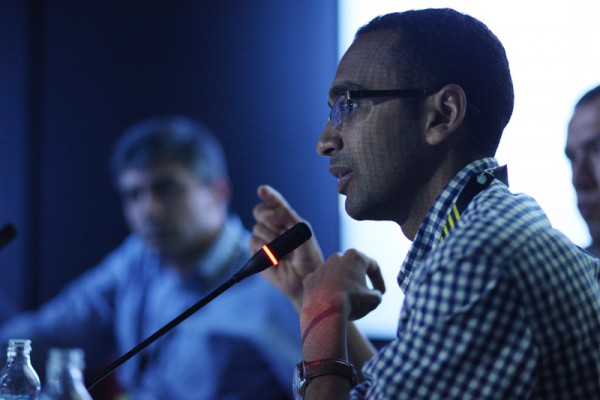 The Egyptian economy is in free fall since the revolution, but as he explained, in that country people were convinced that things will be better.

“We were working in companies and we thought that we will make progress. But today, 99% of the laps and companies with whom we could cooperate is about to close, “said Adel.

As a positive example in the economy Adel singled out the construction of the Suez Canal, which should soon be completed.

Baybars Örsek from the Association of dialogue for a common future said that the events and protests in Gezi Park drew great world public attention to the situation in Turkey.

Orsek spoke about the elections which are to be held in a few days in Turkey. He said the current political situation is very complicated due to the pro-Kurdish left party announcing its participation in the elections.

Turkey was a successful example of economic growth, but this growth is no longer happening, and the country is currently harbors aot of refugees from Syria, which brings problems, both in economy and security.

“Turkey is moving away from the EU, and soon after the election all sorts of things could happen,” said Orsek.

Dana Sofi pointed out that Iraq is the best example to show what democratization after the revolution looks like. “It has become a nightmare for the people, primarily in Egypt, Syria and Libya. Now we are far from democratizatio”, said Sofi.

“In 2003 we thought we might have a new Iraq, a tolerant Iraq that respects human rights. That was unrealistic and now we’re in a nightmare. We were confronted with terrorism. Alquaida and IS are on the scene now. The region is multiethnic and multireligious, and now we have conflicts of different ethnic groups in Iraq. The new challenge is the fight against ISIS, which exists in several countries across the region. We are faced with a civil war, internally displaced, and 2.8 million refugees are in the region where Kurds live, “said Sofi. 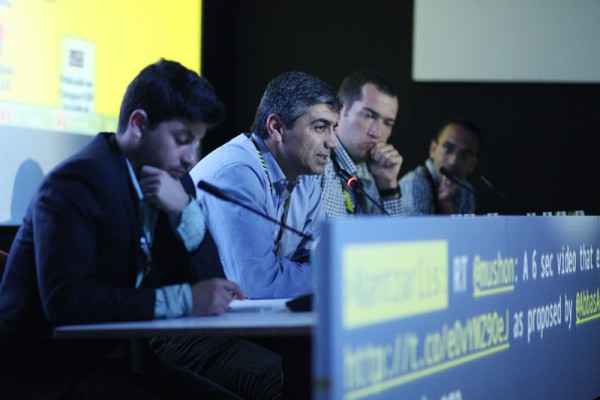 He added that there is hardl a promising scenario in which democratization and human rights are implemented in general.

“We can not have a bright future for any of the things that this conference deals with. Transparency and accountability are virtually impossible in the context of new technologies, because of almost entirely destroyed infrastructure, “said Sofi in his introductory remarks.

The threat of ISIS is noticeable in Jordan, which produces the fear to the citizens of this country. Sami Hourani spoke about the situation in this country. He presented the two tools for civic activism in Jordan.

Divan – diwanieh – is a series of online public discussions on various topics, and Hourani gave a few examples of these discussions.

“At first Divan we had a topic of citizenship of Jordanian woman who, in case they marry foreigners lose their right to citizenship. The debate on media freedom in 2013 was also current. Politicians need to know that someone is watching them, and citizens must be aware that they are participants in the process, “says Hourani.

Debates are conducted in the most conservative areas of Jordan, which intends to make people outside capital city more active and more aware.

Another tool about which Hourani spoke about is fadfed.org (let it out), the electoral portal with a variety of qualitative and quantitative research. Within this platform offline activities that were later translated in the online world were carried out.

Citizens were given plain white paper on which they attributed all those topics that are important to them and that they themselves would like to discuss.

All these actions have helped to develop the participation of citizens in decision-making processes.

However, all panelists pointed out that they have the hope of a better future despite the current bad situation.

Adel Abbas said that Egypt has a lot of problems but it has 90 million inhabitants.

“I think that social media provides an opportunity for debate. Now we have to find a location to be interactive. The media is controlled by the militants, and is of course being bribed. We are faced with a large number of false news and it happens every day, and people consume them. We have an idea to make one Web site to get back to the Egyptian media scene. It’s hard to do it in Egypt. Now we do crowdsourcing project with a small capacity, but I hope we can do something, “said Adel. 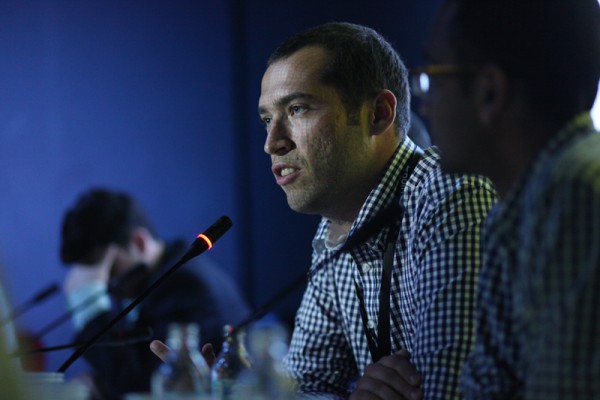 Orsek pointed out that young people in the country are not satisfied and that they are always looking for more as a hope for his country.

“Dissatisfaction and the desire of young people to do something is something I would single out as a hope,” said Orsek.

Dana Sofi said that his hope lays in the Kurdish region in the north which has a different system than the rest of Iraq. As positive examples in the region,  he stated a new Law on NGO sector, the Law on demonstrations, the Law on Free Access to Information of 2013, but also the unity of the NGO sector and public authorities.

“Unity is organized between civil society and government where they made a joint group for policy making. The model, in addition to the above laws now applies to other spheres which gives hope that the parliament would be open to democratization, “said Sofi.

With regard to Jordan, Hourani said that people in this country have a high level of hope, which actually gives some hope.