Panel on the topic of elections monitoring in Albania and the role of civic society in that process was opened by the moderator Ivana Cvetković Bajrović (NED), who briefly introduced us to the hardships of election processes this country undergoes for the past 20 years. 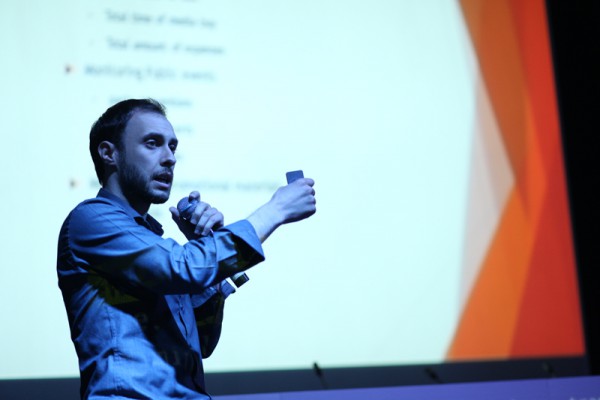 First speaker was Aldo Merkoci, director of media in Mjaft project. During his work in civic society, Aldo gained a lot of experience in government institutions monitoring, with focus on elections, transparency and political responsibility. Today he presented experiences from campaign expenses monitoring of political parties during the elections in 2013. the campaign was based on media advertisement, promotional material and public events organisation monitoring. They counted individually all expenses that were 8,4 billion Euro in total, and they published their findings on Lupa Zgjedhore 2013 portal, created especially for that cause.

After Aldo, Besjana Hysa, Project Manager on Albanian Science Institute, addressed the gathering. This graduated engineer from Polytechnic University in Tirana has been working for almost four years on transparency promoting through data, overseeing and analysing all information regarding public expenditure in Albania. Besjana introduced us to various activities of election expenses research for period from 2009 to 2013, using data provided by OpenData Albania portal.

AIS – Money and election from Point_conference

Besjana’s colleague from the Albanian Science Institute, Erald Hoxha, presented project Za’Lart Albania which created a web platform and 2013 elections application, through which the citizens could report any cases of vote manipulation, public administration or child abuse, and other electoral irregularities.

Money government and Politics from Point_conference

At the end of the panel Aldo Mercoci from Mjaft addressed the gathering again and presented the Vertetematesi portal, i.e. Albanian Istinomjer, a web tool that deals with electoral campaign promises. As main features of working on that field, Aldo named excess of political demagogy and a lack of collective memory of the voters.

Discussion followed where attendees asked questions to the presenters about various aspects of elections in Albania.