Chief Executive of the MySociety, Mark Cridge talked about the Past, the Present and the Future of this e-democracy project of the UK-based registered charity named UK Citizens Online Democracy. It began as a UK-focused organisation with the aim of making online democracy tools for UK citizens. However,as those tools were open source, the code could be and soon was redeployed in other countries. MySociety has been going on for 15 years. They help citizen understand where power lies, and then they give people tools and techniques to be able to extract power. 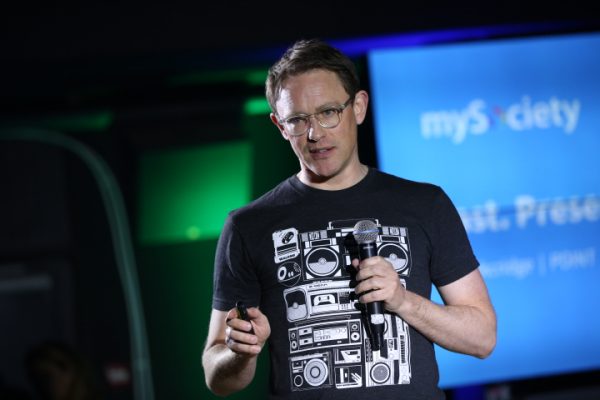 MySociety started as a group of hackers who came together and figured a way to use the technology to improve citizens relationship with government. Some of the tools they developed are:

TheyWorkForYou is a parliamentary monitoring website which aims to make it easier for UK citizens to understand what is going on in Westminster as well as Scottish Parliament, the Welsh Assembly and the Northern Ireland Assembly.

FixMyStreet platform is free and open source software which enables anyone to run a map based website and app that helps people inform their local authority of problems needing their attention, such as potholes, broken streetlamps, etc. The UK version is FixMyStreet.com.

Alaveteli is free and open source software to help citizens write Freedom of Information requests and automatically publish any responses. The UK version is WhatDoTheyKnow.

WriteToThem is a website which allows UK citizens to contact their elected representatives. Users do not need to know their representatives’ names: instead, using the mySociety software MapIt,

Pombola is free open source software for running a parliamentary monitoring website inspired by TheyWorkForYou, and many more.

Their overall aim is to create impactful services that benefit as many people as possible, that’s why they are concentrating primarily on appropriate commercial services. This new approach will mean better developed complementary commercial services with larger potential and that will be able to support charitable aims and objectives of MySociety.