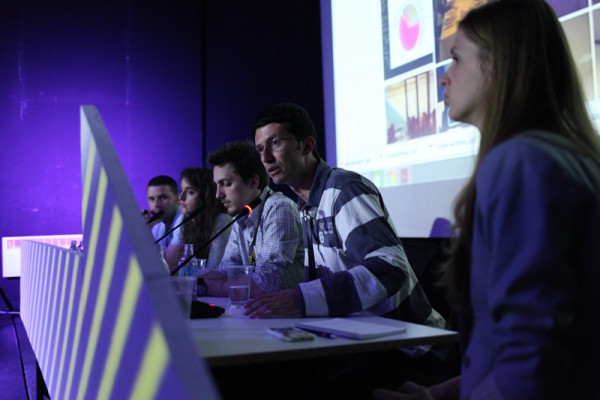 IPKO Foundation deals with providing support to a new generation of leaders with digital vision for Kosovo, and Altin Ukshini introduced us to their activities. He presented the platform Digital Kosovo with which they want to help the process of digital integration of Kosovo. Since February 2014, Digital Kosovo has successfully integrated this youngest European state into popular platforms such as : Facebook, Google, Dropbox, Oracle and World Wide Web Consortium.

Initiative Wiki Academy Kosovo was also presented, with which they want to increase quality and quantity of online content in Kosovo.

Furthermore, there was the Bar Camp in your city initiative that is organised every two months in six municipalities in Kosovo. It is about informal gatherings in local bars where people interested in informational-communicational technologies exchange innovative and social ideas.

Altin also talked about some other IPKO Foundation activities, like “A violence free future” with which ethnic and religious tolerance is supposed to be promoted in Kosovo, and he announced Dokutech’s conference in Prizren that researches challenges and social implications of technological innovations.

At the end of this really active organisation, Altin presented “Prishtina Hackerspace”, workspace in Priština intended to be a place for education and experimenting in technological, educational, cultural and scientific purposes.

Arianit Dobroshi from FLOSSK, organisation that promotes free software in Kosovo, talked about dangers and inefficiencies of mass surveillance of telecommunications and internet, as well as about ways in which it is possible to fight them. One of those ways is encryption, so Ariant presented “CryptoParty”, FLOSSK initiative that wants to tech people how to use basic cryptographic tools in a fun way.

In the end the initiative named “Girls Coding Kosova”, which aims to encourage women for full realisation of academic and expert potential in tech fields.

Presentation was moderated by Lejla Sadiku from UNDP Kosovo.