POINT’s last panel was dedicated to the importance of “open ownership” – getting insight into money trails of the big and influential companies. 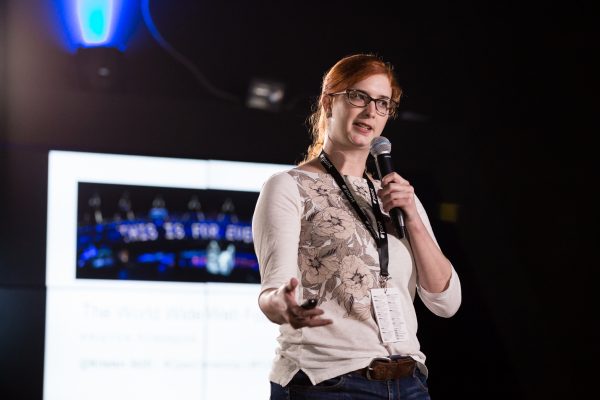 Moderator Damir Dajanović (“Why not) spoke to Kristen Robinson (The web Foundation) about their web platform and how important it is for the data on company ownership to be open and accessible.
Kristen asked the audience about their level of knowledge about the definition of ownership and, since not all hands were raised, proceeded to explain the basics. She said it’s pivotal to know who’s behind huge and most profitable companies, both for transparency and establishing the money trail.

Kristen emphasized that there is currently a “crisis of trust”. The companies fear to expose who they really are and what they really do.

All of this prompted her organization to start the page “Moneymeter”, which contains data on company ownership, budgets, profits, contracts, etc. These data are usually kept secret and are very hard to follow. The societies are globally unaware of who it does business with.
Web Foundation, presented by Kristen, works with 6 partner organizations to develop similar platforms in many other countries. This is becoming more and more necessary with the growing number of off-shore companies and money laundering worldwide. They have developed a special methodological approach for choosing the country where the platform will be tested and developed. The one closest to us, that will soon get a “moneymeter” of its own, is Ukraine.

Kristen also said that we need to change the norms and ideas about what doing business usually entails. Primarily, all company data should be available in open formats, searchable and available for further use and reproduction.

The platform’s database is searchable by company name, which returns the data on where and when it was founded, who’s the owner, who it does business with, etc. The page displays all the documents, even the “suspicious ones”, which are probably connected to corruption. The platform also offers the anti-corruption guide.

Kristen stressed that, in general, a different approach is needed when researching the private and the public sector. In her view, it is better to focus on analyzing the private sector, since the public authorities have different mechanisms for lobbying or making business contracts.

Finally, Kristen concluded that it will take time for the platform to start functioning in full capacity, but for now it is open for everyone to test and learn the principle upon which it operates. Technology is just a tool, and, on its own, it can’t bring any change – the people who are willing to use it are the key for that.