The first panel discussion on “POINT Talks” platform named “Elections during the pandemic: Case Balkan” shared the experiences of the electoral process in the SEE region, which took place last year during the Covid-19 pandemic. The elections that took place in the Republic of North Macedonia, Serbia, Bosnia and Herzegovina, and Montenegro were the focus of this panel discussion.

Beata Martin-Rozumilovic, Director for Europe and Eurasia at the International Foundation for Electoral Systems (IFES), gave a brief overview of the electoral process in each of these Balkan countries, noting that the Covid-19 pandemic has led to serious challenges in many aspects of public life, including democracy and good governance.

“These circumstances have raised a number of issues for holding real elections in a way that balances health issues with the democratic needs of countries”, said Beata Martin-Rosumilovic.

She further noted that “Election administrators had to develop security measures and assess election day processes to ensure that voters, associates and observers are protected and the risk of exposure is limited”.

Milica Kovacevic, president of the Center for Democratic Transition from Montenegro, explained in the discussion that this Western Balkan country has never had a state of emergency due to the Covid-19 pandemic, but due to the pandemic, the elections in the country were held on August 30, last year, which was earlier than the initial plan according to which the elections were scheduled for October.

“However, that would allow the government to be more flexible, change the rules and organize a few-day vote like other countries have done”, she said.

Kovacevic said that the organization of the election day went smoothly, but everything that happened after the announcement of the results, including the mass celebrations of the winners, and then the marches of the supporters of the ruling party, led to the growth in the number of infected persons with Covid-19 in Montenegro.

“We could have learned from our neighbouring countries with a similar legal system, but that did not happen”, she said, adding that Montenegro was not prepared for the election process.

Kovacevic added that a set of rules for holding elections in the conditions of the coronavirus pandemic, which were unconstitutional, was adopted, which was confirmed by the Constitutional Court itself. She also clarified that not everyone understood the demands of the non-governmental sector to enable everyone to vote, and they gave priority to arguments about endangering public health.

“Our argument was that we will have to live long after the elections, and in the conditions of the coronavirus, for quite a long time, and we cannot allow basic human rights to be abolished just because someone is positive for the coronavirus”, she noted.

Kovacevic also said that protests against the Law on Freedom of Religion, which took place across the country, were stopped in March with the declaration of an epidemic. She also explained that was the time when the first false narratives about the coronavirus started.

“One would think that people will now respect the new rules because the new government won a large number of votes in the elections, but it is still very difficult for people to believe in the danger of the virus, and disinformation does not stop spreading”, Kovacevic said.

In his presentation, Filip Stojanovski, Director of Partnership and Resource Development at the Metamorphosis Foundation, focused on two recent research on misinformation, conducted by this foundation. He cited a survey carried out as part of the CriThink project, which found that more than 60 per cent of the population was exposed to specific conspiracy theories related to the Covid-19 pandemic. Despite this, disinformation campaigns did not have complete dominance in their attempt to undermine citizens’ trust in institutions during this period. 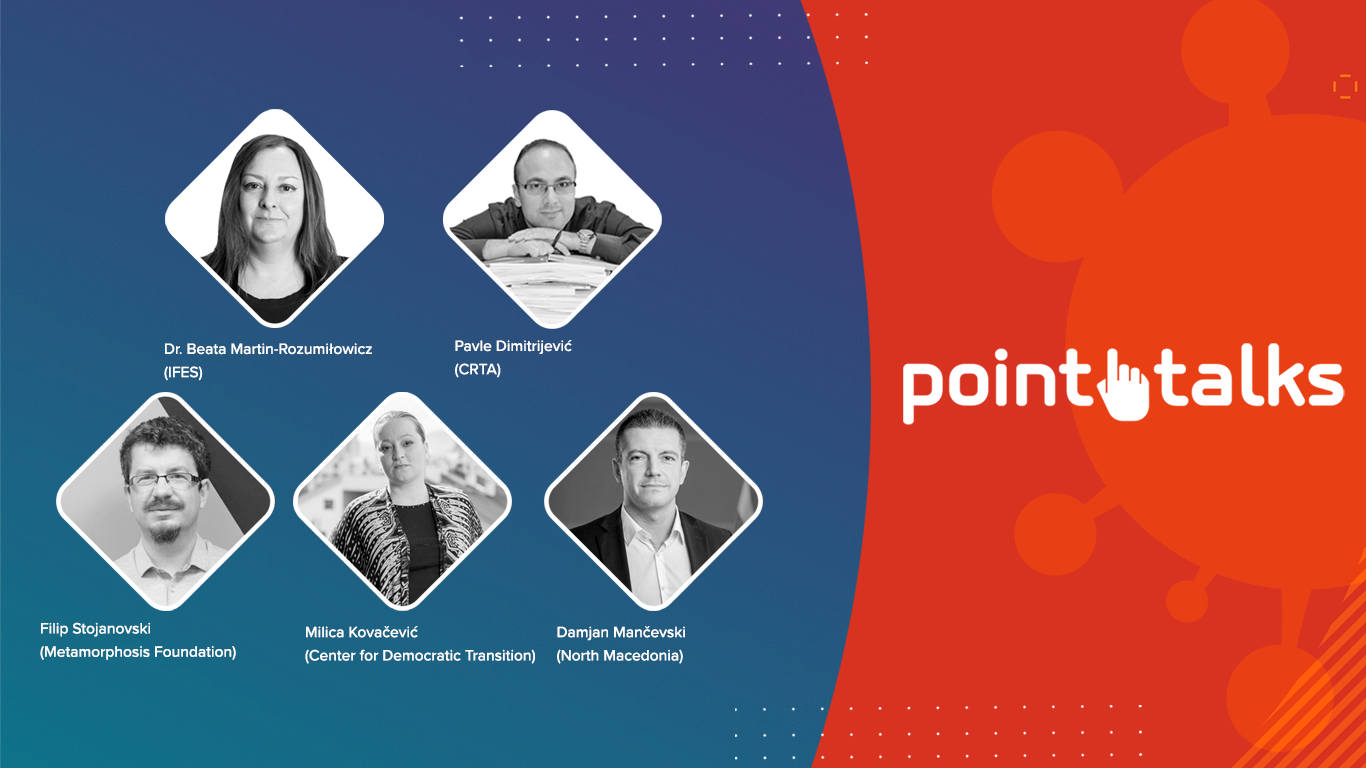 Regarding the election period, Filip Stojanovski cited a study prepared by the Metamorphosis Foundation in partnership with the German Friedrich Neumann Foundation, which examined disinformation content treated through fact-checking articles, debunk articles or counterinspin texts.

Thus, he pointed out the five most common types of misinformation related to the early parliamentary elections held on July 15, in 2020, during the Covid-19 pandemic. The first includes political manipulations about the election date; the second refers to the allegations of deliberate “sacrifice of lives” of citizens; the third is about the allegations of health protocols “tailored” by politicians, followed by misinformation about the privileged treatment of specific groups of voters and post-election policy changes.

Filip Stojanovski stressed that there must be active measures to combat misinformation in society, which will not come only from the civil sector. He added that during the Covid-19 pandemic, it is very important to understand that misinformation is a threat to democracy and the health of citizens.

He added that the ruling party in Serbia was active in the field by visiting homes, especially in the area of “​​distribution of humanitarian aid” across the country’s rural areas. Dimitrijevic also spoke about the voting protocols, which were announced four days before the Serbian parliamentary elections. Despite the government’s media dominance, the opposition campaigned for a boycott of the elections online, with turnout being one of the lowest ever in Serbia and having a particular effect in Belgrade.

As a former politician, the former Minister of Information Society and Public Administration Damjan Manchevski also participated in the panel discussion. He pointed out that the Covid-19 pandemic affected the way the election campaign was organized in the Republic of North Macedonia, but this had no significant reduction in turnout on election day last year. Regarding the misinformation, Manchevski said that in the last elections the country was not subject to such a major disinformation campaign as was the case with the period before the referendum in 2018.

Besides this initial “POINT Talks”, the entire POINT conference will be held in digital format this year, and the content of the upcoming conference events will be available on the platform pointtalks.zastone.ba, POINT conference web page (point.zastone.ba), as well as on social networks.