Second panel of the Data Advocacy Day of POINT 4.0 conference had a goal of presenting the state of open data in countries of the region, present what has been done so far, and which steps are planned for the future. Moderator of the panel was Raša Nedeljkov from organization CRTA from Serbia, and participants were: Marija Kujačić from Directorate for eGovernment of Republic of Serbia; Srđan Kusovac, Head of Operation Group for OGP and head of Public relations Bureau of Government of Montenegro; Goran Kučera from Ministry of Justice of BiH; Sandra Pernar from Office for Cooperation with NGOs of Government of Republic of Croatia; Ruzhdi Jashari from Agency for Protection of Personal Information of Republic of Kosovo. 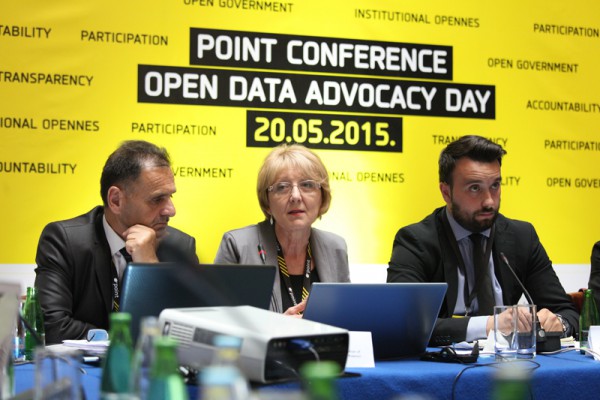 Srđan Kusovac from Montenegro described the situation with open data in Montenegro in one sentence: “Everything is available, but incredibly difficult to find.” He mostly focused on the flaws in process of opening the data in institutions of Montenegro in his presentation. By showing websites of Montenegrin institutions he practically presented these flaws, and emphasized following deficiencies:

–          Data is frequently not published in computer-readable forms

Not to present everything in a bad light, Srđan Kusovac used official website of Official Journal of Montenegro as a positive example, which, according to him “looks like it was not done in Montenegro”, and he emphasized how this is an excellently organized portal that enables every citizen to find data. In his presentation, Kusovac noted that there is a need for “a little more creative interpretation of laws by government officials”, and underlined that, while he was working in the Government of Montenegro, he published all documents that were not classified by the Government of Montenegro.

Next steps in opening data in Montenegro are enabling of citizen participation in management of modern technology usage, adoption of unique bylaws to treat open data, increase of volume of services provided in online forms, and promotion of all said activities to enable even greater citizen participation.

Sandra Pernar noted that by implementing the OGP, processes were started that began changing state of affairs in Croatia, and that support of actual Croatian government meant a lot for creation of both action plans for OGP implementation. According to Sandra Pernar, most significant progress in carrying out of the first action plan was made in field of citizen inclusion and enabling access to information, as well as proactive information publishing, which resulted in less usage of Law on Information Access.

Opening Government in Croatia from Point_conference

Pernar emphasized that both Croatian action plans for OGP implementation were highly rated. Regarding the second action plan, Croatian priorities are: further opening of data and establishment of database on budget expenses. 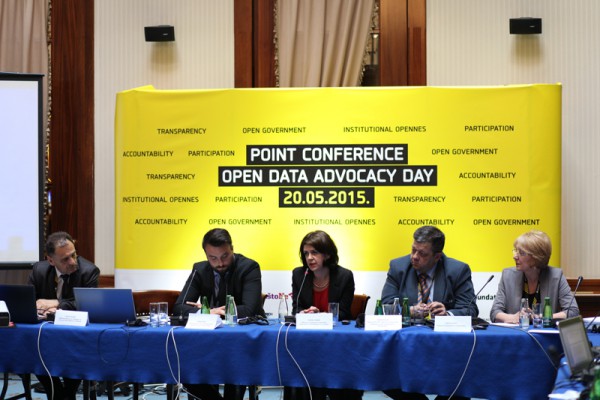 Pernar listed portal for open data of Republic of Croatia as very important, because there are data sets on it that are available to all citizens, as well as portal for e-consultations, which is open to all citizens for registration, where they can receive e-mail notifications on public consultations on laws and regulations.

Ruzhdi Jashari from Agency for Protection of Personal Information of Republic of Kosovo informed the panel about legislature regarding personal information in Kosovo, and priorities in data opening process and fulfilment of OGP standards in Kosovo.

Republic of Kosovo joined OGP in 2013, and Action plan for OGP was made for period until 2017. Priorities of action plan are: improvement of public services, public integrity, increase of government responsibility and increase of responsibility in public resource management. This plan has 29 actions, and its implementation should be finished in second half of 2017.

Marija Kujačić from Directorate for eGovernment of Republic of Serbia emphasized that the process of data opening is very important for every country, and it can benefit not only citizens, but also private companies that can build their strategies and work plans based on those information, improve their business that way, and contribute to the development of economy.

Positive examples from Serbia are related to public access to information such as land registers, and existence of web sites for online public debates on laws.

Serbia joined the OGP in 2012, and Action plan for implementation was adopted in December 2014. Most important steps in implementation of OGP will be establishment of open data portals, and creation of mobile applications and web services for usage of services of public administration by the citizens.

Kujačić also emphasized that in the near future an estimate on readiness of public institutions for data opening will be done, and suggestions of application of open data in institutions will be created.

Goran Kučera from Ministry of Justice of BiH said that Bosnia and Herzegovina is a country that just recently joined OGP (September 2014) and that, aside from all the problems other countries of the region are facing, Bosnia also has a problem of complicated government structure. He highlighted that data is there and is being published, but are hard to find.

Regarding future plans for implementation of the OGP standards in BiH, Kučera said that soon, most probably in the next 15 days, some sort of OGP committee will be formed with Council of Ministers of BiH, and after that creation of Action plan will get under way. He listed the need to establish minimal standards for data publication for every institution as one of the priorities.

Aside from all things listed, Kučera said that there are regulations in BiH that enable citizens access to information, but they are not being implemented.

Although BiH is the youngest member of OGP out of all the countries in the region, there are positive examples as well, so Kučera announced opening of portal for public consultations with the Council of Ministers by the end of 2015.

After panellist’s presentations, short debate with the audience went underway, and on it interesting questions about OGP were raised, such as should OGP keep the current, top-to-bottom approach, because for ordinary citizens openness on lower levels is much more important. 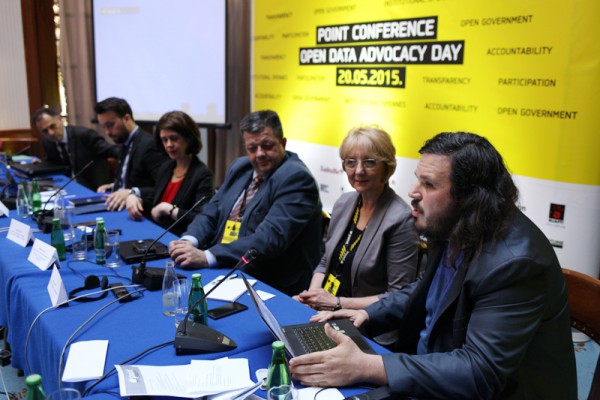 Conclusions of the day were provided by Darko Brkan from Zašto ne?:
In the following period it is important to intensify the work on strategies and road maps for opening of data of public importance, and gradual proactive publishing of data according to jointly defined priorities by the institutions on all levels of government. Publication of data according to data openness standards and with fulfilment of highest possible quality standards is necessary.

It is necessary to implement official portals of open data in all countries of the region, on which all sets of data will be published by the institutions according to above mentioned standards and in accordance with defined dynamics.

Also, experience has shown that in many cases it is necessary to set standards of data collection and publication, and to make design of databases in accordance with it, in order to reduce the volume of data that is hard to find and complicated for analysis.

Representatives of the institutions and civic society have shown readiness for cooperation and joint work on further steps in policies development that will improve the transparency of institutions and enable greater involvement of citizens in decision making processes on all levels of government.

Civic society contribute to promotion of this process in public with their work on practical application, research and initiatives that use data sets, and it is necessary to work intensively on synchronization of efforts in data publishing and usage, and in that sense the cooperation between organizations of civic society with institutions is necessary.

It is very important to continuously and impartially work on following of the process of opening of institutions and information of public importance. In that sense, initiatives of organizations of civic society are very important in analysis of progress. As an example of this, regional network ACTION SEE will, in cooperation with partners from civic society, academia and institutions from the region, finalise Index of Government Openness that has the potential to be a regional indicator of state of government transparency, as well as help in defining future steps in policy development in this field.