A group of organizations from Kosovo developed an open platform “I Walk Freely” aimed at fighting sexual harassment through gathering data about the incidents and reporting it to the local authorities. 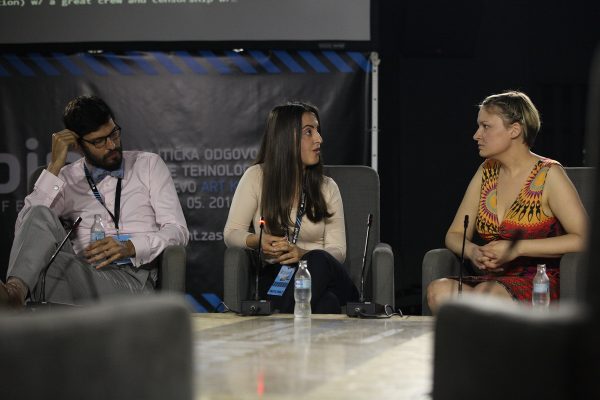 Blerta Thaci (Girls Coding Kosova) and George Labreche (Open Data Kosovo) explained that the idea was to raise awareness of this problem and have the beneficiaries involved in the whole process in order to be able to better understand the problem and disseminate solution. The platform is easy to use, anonymous, accessable even while offline and all the gathered data are protected. The organizations involved in gathering data are visualizing them, mapping the reported incidents and providing analytics.

The platform was developed by an all-girl group of coders in Kosovo and it is available worldwide in several languages, including Albanian, English, Serbian-Croatian-Bosnian and Spanish – currently, it is being translated to Hebrew. So far, the app “Walk freely” has been downloaded over 600 times both in and outside of Kosovo.

Blerta and George invited everyone to download and use the platforme and engage institutions in the fight against sexual harassment – an activity they themselves plan to focus on in the following period.