In cooperation with the association of citizens “Why Not” from Bosnia and Herzegovina, and “ActionSEE” network from South East Europe region, Point conference- Iraq started today with a plan of becoming  an annual tradition. 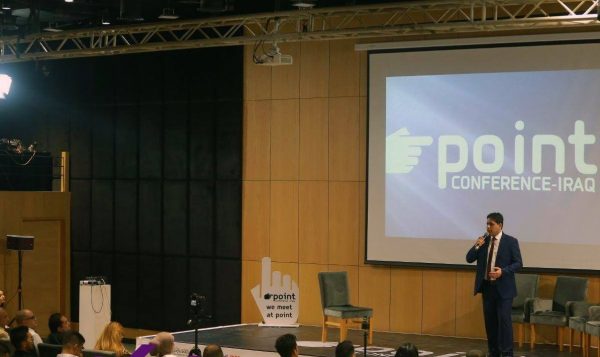 Point conference- Iraq is a unique event that sheds the light upon the importance of using technology, media, and communication technology in enhancing Democracy and active citizenship.

A number of NGOs, in partnership with the-Station Building, during a one -year program, and which would be launched in the conference, would convey a set of expertise and tools in the field of modern technology, to enhance the role of NGOs, and youth activists, in mentoring and observing governance indicators, and the evaluation of House of representatives and Provincial Councils.

At this point it would offer an opportunity to work together with international and local partners, to design and implement programs that would take part and increase social engagement in public policy issues, through E- platform discussions (webinars) and launching advocacy campaigns that would support the correction of the legal and political tuning of democracy in Iraq. Especially those related to the freedom of expression in Iraq and the right to access information.

Institutional and social media would play a major role in this distinctive event, and for the first time fact- exposing initiatives and programs and revealing fake news which are supported, and the discussion would be held about the possibility of giving the chance for independent and professional media bodies to take part through E-media to be an active partner in strengthening the Principles of democracy in addition in being an active tool for spreading accurate information, enabling them to function in all conditions especially the turbulent political ones and struggle torn areas.

The conference at its first year would be held on national level, and most of the foreign speakers will be hosted online. According to assessment of the outputs and results, the founding organizations would discuss the capability of holding the conference on regional level for the next year and hosting the participants from Baghdad. This would enhance the process of exchanging expertise and networking between activists and organizations that function on regional and international level and the active working groups in Baghdad (NGOs, working groups, activists and young leaders).

A big portion of the conference would be the share of the activists and young leaders in Iraq. The event would host more than 100 young activists from 18 Iraqi provinces as speakers, taking part in panel discussions, and as volunteers in programs and initiatives, that would be triggered by the conference.

The participation would be organized through special forms, and the space is open for them to present speeches and PPT, that relate to the importance of technology in society – serving activities and initiatives. Provided services should be of high quality and cover large populations. The conference would also refer to the technology teams’ initiatives that took part in decreasing jobless popualtion in Iraq, improving education, conveying expertise and creating the possibility of partnership  with international expert sides to exchange knowledge and experience.