In December 2010, civil protests erupted in Tunisia which would soon spread across much of the Middle East and Northern Africa in a movement which would come to be known as the Arab Spring. The world witnessed the downfall of the Mubarak regime in Egypt as well as the al-Ghaddafi regime in Libya as a result of these mass demonstrations, which brought hope of substantive social and political change in much of the Arab world. Today, however, the promises of the Arab Spring have been rescinded upon or failed to materialize in many parts of the region. In the most recent edition of POINT Talks, Egyptian activist Ahmed Samih spoke with civil society experts and human rights activists from three different countries about the current social and political situation in the Middle East ten years after the Arab Spring movement.

Executive Director of the Lebanese Transparency Association, Julien Courson, painted a grim picture of the current socio-economic crisis gripping his country. The 2020 explosion in Beirut which cost an estimated $8 billion worth of damage, as well as the economic impact of the COVID-19 pandemic, have all contributed to what Mr. Courson described as the worst socio-economic conditions in the country’s history. To make matters worse, the political leadership in Lebanon has been in continual flux, with 6 different governments formed over the past ten years, and more than two years without a president. Power struggles and inconsistency at the highest level of Lebanese governance have produced a “political stalemate” which Mr. Courson argued poses a serious threat to the stability of the country. With a government which has thus far proved incapable of meeting the demands of the current economic crisis, the everyday lives of Lebanese citizens continue to worsen. So long as the country’s leaders remain incapable of agreeing on a road map for their nation’s recovery, civil unrest in Lebanon is only likely to worsen, with some commentators even predicting a new civil war. Of his nation and the region in general, Mr. Courson noted  that while it is clear that “things are moving, it is not clear they are moving in the right direction.”

Wisam Jaafar, General Secretary of the AIN Network in Iraq, shared a similarly ominous outlook. Mr. Jaafar saw Iraq’s current political situation as emblematic of trends which are crippling the Middle East as a whole.  Ten years after the Arab Spring and nearly twenty years after the democratization of Iraq, Mr. Jaafar highlighted the unwillingness of citizens to utilize the tools and mechanisms of democracy as a major obstacle impeding reform. Following Iraq’s October 2019 revolution, citizens had high hopes for the improvement of the country’s economic situation and government services. Although they have demonstrated a willingness to voice their dissatisfaction in recent years through public protest, the traditional indicators of political participation in the country, including voter turn-out and party membership, have been in steady decline. As Mr. Jaafar pointed out, this trend, which can be observed not only in Iraq but throughout much of the Middle East, is largely attributable to widespread mistrust in local and central governments.

“People in many regions have zero-percent trust in any government…They don’t think governments are capable of making any change [and that] they are too weak to control what is going on within their borders.” In many countries, these sentiments are wholly justified. Weak state institutions, political corruption, and sectarian divisions are just some of the additional problems Mr. Jaafar identified as destabilizing and crippling factors which must be addressed in order for the region to achieve social, economic, and political progress. 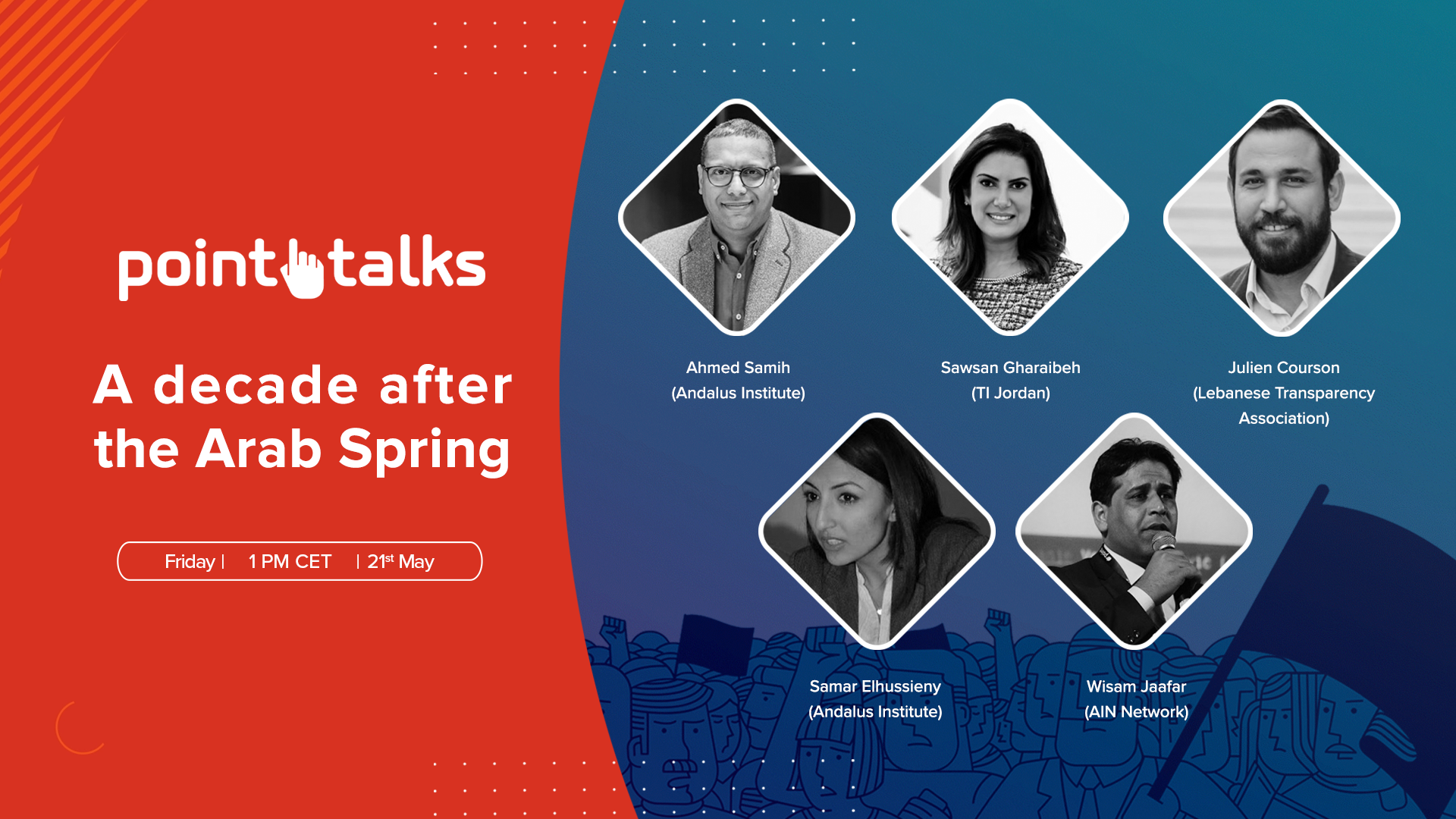 The view from Egypt was even optimistic, where researcher and activist Samar Elhussieny characterized human rights abuses at the hands of the current government as worse than at any point in recent history. Ms. Elhussieny painted a troubling picture of the social political climate in Egypt ten years after the historic protests in Cairo’s Tahrir square which came to symbolize the ideals of the Arab Spring. The voices of the country’s political opposition as well as those of journalists and human rights activists are routinely silenced, through widespread detention of individuals on such illegitimate grounds as merely running for public office. New laws governing NGO’s have also vastly complicated the monitoring of human rights violations in the country, effectively outlawing the activities of human rights organizers unless they have received special approval from the country’s political or military authorities. Ms. Elhussieny also described the government’s monopoly over the Egyptian media. The country’s independent news agencies have systematically been taken over by entities loyal to the regime, resulting in a media landscape that is little more than a mechanism for state propaganda. While she acknowledged that the new presidential administration in the United States has inspired some limited action on the part of the Egyptian government to create the impression that democracy and human rights in the country are improving, these gestures have had minimal impact on the overall environment. “Democracy in Egypt is not there. We’re talking about a clear military state…we’re  talking about a general leading the country. Even when it comes to different democratic mechanisms—elections, voting, political participation in general, administration, protest, or even civil society—all of these elements are…under oppression.”

Mr. Samih remarked on the stark contrast between this and a similar panel discussion he had hosted just five years after the Arab Spring, when panelists from regional activists had a far more enthusiastic outlook on the region’s future. Yet, despite many of the worrying trends and formidable obstacles which were discussed in the course of the most recent panel, the participants were far from despondent. They identified several positive developments over the last decade which gave them hope for the future. Panelists agreed that Tunisia’s social and political development since the Arab Spring served as a particularly inspiring example of lasting democratic reforms engendered by the civil mass movement. However, as Ms. Elhussieny observed, “every country has its own relativism, its own characteristics that need certain solutions,” and there is no single model which can be applied successfully throughout the whole region.

Panelists were also optimistic about the proliferation of internet technology and social media, which helped fuel the Arab Spring and continues to be an important factor mitigating otherwise negative trends in democracy and human rights. As Mr. Courson summarized “Citizens are able to know better on a daily basis of what is happening. Technology has also helped some government administrations to become more transparent but surely the process and the way is still long…Social media is playing a very positive role in mobilizing support and shedding light on human rights violations, on corruption cases and…is putting pressure on the government and pushing the government to reconsider some behavior.”

No doubt the most positive impact of the Arab Spring however was the change in political attitudes which it precipitated across the Middle East and North Africa. The commitment which the movement inspired to human rights and democracy was articulated by Mr. Jaafar as a lasting and positive achievement: “More states in the [Middle East and North Africa] region recognize civil and political rights.  It is stated in their constitutions, and is a huge belief inside everybody, every citizen in the MENA region.”

Note: Due to unforeseen electrical outages, Dr Sawsan Gharaibeh, Co-Founder of Transparency International Jordan, was unfortunately unable to participate in this edition of POINT Talks.