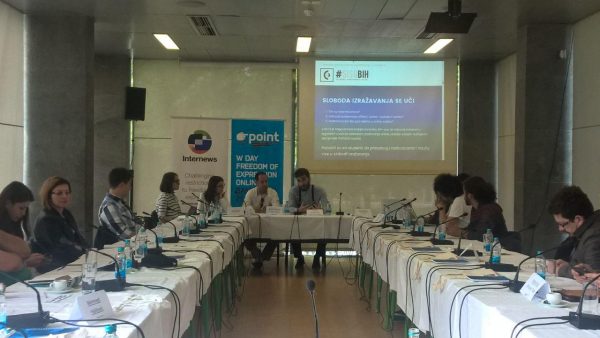 Darko Brkan, from Zašto ne? (Why not?) opened the first session with a short description of the Point Conference in general, its goal and this event’s purpose, which was to review, explain and discuss the issues of Freedom of Expression in B&H and the region.

In the introduction part of the conference, two organizations presented their projects, respectively digital advocacy projects dealing with issues of freedom of expression in B&H.

The first project is implemented by the Republika Srpska (RS) NGO Network, mainly dealing with the ‘offline’ part of the population, providing them means to report on issues and problems they encounter regarding basic municipal services, as well as restrictions to their freedom of speech in their local communities, trying to solve them, answer their questions and share it with the online community. They are, at this time, focused on 25 municipalities in the Eastern part of the RS, but hope to widen project activities in other parts of B&H, especially the Federation of B&H. Project name is You are not alone (Niste sami) and more informations are available on their web-site reciteslobodno.org

The second project is implemented by the Center   for Media Law from Sarajevo, trying to raise awareness and educate university students and the general population on Freedom of Expression in Bosnia & Herzegovina and domestic as well as international legal provisions regarding Freedom of Expression. Name of the project is  SISUBIH (Sloboda izražavanja se uči).

The Internet was a unique place where people could exercise those rights, which might not be the case now. There is a lot of ‘bad’ legislation being adopted in order to censor or control and limit these freedoms, under the excuse of security. There is also an issue of people not knowing exactly how much information they share online, and the consequences of them being digitally uninformed are yet to be seen.

The second session was more focused on the domestic and regional provisions on freedom of expression.

Speakers at the session were Anita Mitić from Serbian NGO YIHR, Dragan Bursać from web portal BUKA and Mehmed Halilović who is a legal expert for Internews regarding media law.

Session brought up many ongoing issues in the region and growing censorship that best reflects in the new law of Public order and peace,  adopted by Republika Srpska (one of Bosnian entities), that basically with its content, legitimizes restriction on freedom of speech online.

Main conclusions from the session were those of increased auto-censorship and growing fearamong population and activists. As societies who were under communism for so long, we still hadn’t learn to embrace culture of democracy, nor we are used to it. This is also great issue among journalists, who are afraid of reporting the truth, being afraid of consequences and some sort of retaliation. Not to mention clientelism that happens between media companies and political parties that generally put very bad light on the journalism.

We need to understand that we can not expect any progress if we are not ready to fight for it. Freedom of expression is not something to be taken for granted in this region and we need to be ready to, every day, stay strongly in defense of it. There is no time for fear.