“We did not start from the beginning with this book, for a simple reason, we could not figure it out what the beginning is,” Viktor Marković from njuz.net explained the process of working on the book The Real History of the World. At the end, the book starting from “biblical times” and ends with the death of Josip Broz Tito “when the world history ends”. 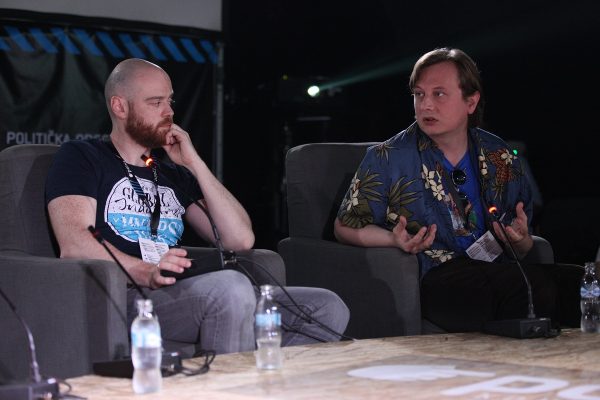 The book was presented by Sarajevo artist and stand-up comedian Damir Nikšić, but very harsh criticism was coming from the News Bar team who appeared at the stage as a book critics.

This is the third book by the Njuz.net (Ovo nam nije trebalo and Knjiga za sajam). Damir recommended the book as a good way to fight depression. “This book is the incredibly good way to transfer satire into a book,” he concluded.

Marko Dražić claims that some historians recognized heir book as very valuable saying that even the “real” history books are not much different because it is always the interpretation of events from the past. “Everybody has its own vision,” he adds.

Critics from the News Bar asked if there will be the fourth book. “That is the most important when you write a book – to have the sequel.”

For anybody who is interested in history, according to the Njuz.net, the book is now available even in Bosnia.