During the 5th session, people from Njuz.net and New Bar, two satirical media projects from Croatia and Serbia, were “fighting” about who is funnier. The verdict was impossible to give. Absurdity is the second thing they compete in – the absurdity of politics in their countries. 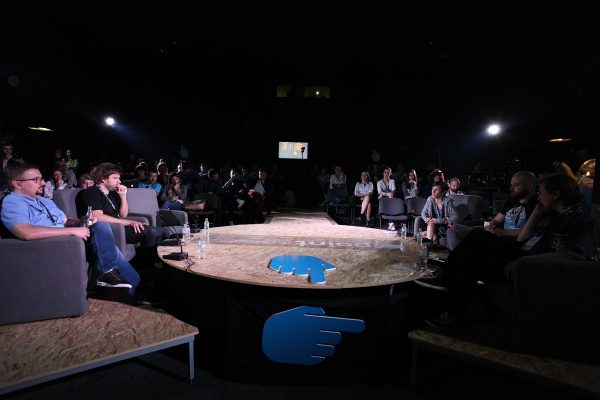 ”We have the most ridiculous government ever. Every day they do something new that you cannot accept. Nothing make sense anymore,” Borna Sor from News Bar said.

Nevertheless, they do not like when the politicians find them funny. Marko Dražić from Njuz.net remembered when he met one of the politicians they wrote about and asked if he’s aware of their articles.

“I was so angry when he said it was funny. At least you think they will have some bad feelings about it. That was not the answer I wanted to hear,” Marko said.

Unlike Njuz.net, News Bar was censored, so it must be that Croatian politicians do not find them that funny. However, Vlado Lučić believes their show was banned for a good reason.

”We are the group of untalented young men who are making fun of our country, and somebody had to cancel it,” Vlado remembered, saying that they are still not really sure of the real reason behind this censorship.

After getting banned from TV, News Bar decided to continue working with video, but posting it online.

Njuz.net and News Bar started as online platforms a couple of years ago, and television came later. Having experience with two different types of media, they concluded that politicians react less harshly to their online stories, than to those on the TV shows. Viktor Marković believes it proves that regional politicians do not see the Internet as any real threat. However, “we write differently on the Internet and on TV. On The Internet, we are the only ones responsible for what we write. On TV, we are guests of some station, there is somebody else involved, and we have to think about that too,” Marković said.

It was hard for them to answer if their satire has the influence on the public, but both Njuz.net and News Bar do see their work as activist. Their goals go beyond just amusing people, as they hope to contribute to changes which civic society has been asking for in both countries.

Both web sites are commercial projects and depend on advertisement, but it is hard to find publishers brave enough to support them.

”We are managing to compete with the reality. It is our biggest competition,” Viktor concluded.