During all previous editions of POINT conference, presentations of multiple projects, initiatives and tools of civil society organizations developed in the past year, were an important part of the programme, and the same goes for this edition of the conference. The first part of the panel allowed us to attend presentations of several projects and initiatives from Slovenia, Albania, Montenegro, Kosovo, and Bosnia and Herzegovina. 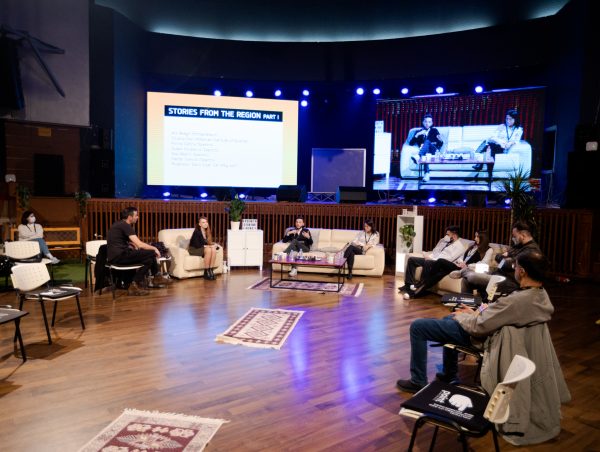 Stories from the Region: Part I included presentations by Arb Abdyli, Silvana Doçi of the Albanian Institute of Science, Polina Čečina, Dušan Kovačević, Ana Ašanin and Stefan Vuković from Spectro.

The initial presentation focused on Spectro – a Montenegrin/Serbian startup, developed with the assistance of Telenor and Government of Montenegro, to tackle the wildfire at rise using simple and modern technologies.

Čečina elaborated that wildfires are an unpredictable natural disaster that affect unimaginable regions, including Syberian forests. This disaster is not uncommon in our region, as Čečina explained because they occur annually.

The idea rose up after Montenegrin wildfires, which in 2017 destroyed 60,226.42 ha of forests, Luštica peninsula being heavily affected.

By digitising the traditional method of a fire lookout tower, she pointed out that the danger of wildfire would significantly decrease. This modification includes application of camera use with implemented algorithm with deep neural networks.

Ana elaborated on the four-step usage process – algorithm – processed video surveillance will detect wildfires in its early stages and alert users and fire departments. This allows premature detection and early – on prevention.

The universality of Spectro applies to other surfaces – oil gatherings, fields, factories, etc. The second-hand benefit of this startup, as the team explained, is the financial one, as other options such as thermal cameras are overpriced.

Albanian Institute of Science representative, Silvana Doçi demonstrated Open Data Albania – an initiative focused on the so-called Public – Private Partnerships (PPPs). As she pointed out, the PPP market in Albania is extremely active, including 275 concessions that encompass 35% of the countries GDP. This puts the state economy to many economic risks and liabilities.

Doçi defined Albania as the most courageous state regarding PPP in Europe – most of the concessions and PPP’s connected to the hydropower sector. She explained that contingent liabilities consist of 11,6% of Albania’s GDP or 1.2 billion Euros in 2020, which additionally imbalance the state’s financial conditions. Other factors imply that mentioned liabilities are much higher than evaluated, such as corruption and duration of these contracts.

Silvana’s conclusion included the possible solution – she pointed out that such contracts should serve Albanian citizens rather than put them in financial danger.

ROI Academy set its beginnings in Kosovo and expanded to Albania and North Macedonia. It focuses on online and in-person training in fields such as digital marketing, programing, development of mobile apps, etc. Abdyli pointed out that the academy faced success in the first two years, mainly from offering internship programmes. The final goal of these programmes is teaching IT skills to all interested individuals which would open their path to a career in the sector.

The COVID-19 pandemic, as Arb pointed out, led to Academy’s expansion, both to the online world and in the number of participants, which allowed the team to focus on the fourth country in the region – Croatia. The pandemic also inspired the idea of scholarships to people with disabilities, which were given to 100 individuals in the form of training and internships.

During the Q&A part of the panel, Arb expressed that ROI academy is a self-financing one, teaching students of all age groups. Doçi emphasized the lack of discussion on issues of PPP between the Albanian position and opposition and also two benefits of such contracts in regard to hydropower – 1. citizens now have regular electricity, 2. Albania’s electricity exports are higher than imports. Dušan Kovačević from Spectro spoke about the lack of cooperation between governments and national reserves in the Balkans and future goals, which include greater collaboration with Boka Kotorska fire department and connection of as many personal IP cameras to the software.