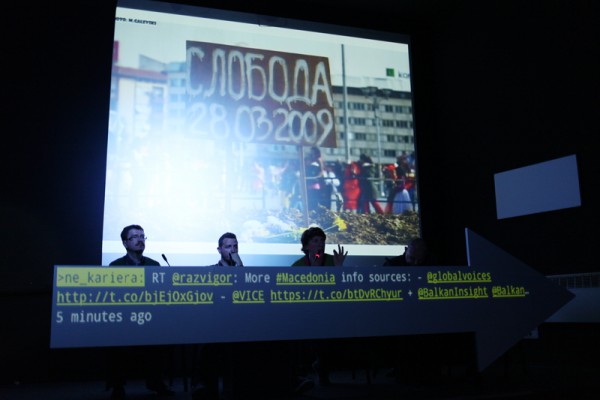 Panel about the political turmoil in Macedonia gave a really interesting overview of the situation in this country thanks to Gjorgji Pulevski (Student plenum), Biljana Ginova (Come on!), Suad Missini (CSRC) and journalist Zoran Bojarovski who participated via Skype. The panel was moderated by Filip Stojanovski from the Metamorphosis Foundation.

At the beginning of the panel, the moderator Filip Stojanovski showed several cartoons by Darko Markovic which may be related to the current situation in Macedonia in terms of corruption, and bribery of opponents, suppression of freedom and the effect on free speech.

Suad Misini pointed out in the beginning of his presentation that he, in his interview to Aljazeera, said that there is no great interest in developments in Macedonia, and it’s a great pity.

Misini said that, at a time when this country adopted the Law on Free Access to Information Act (FOIA), it represented a good tool for journalists and activists. However, after several years of its implementation  it turned out  that the law in fact has turned into its opposite. In practice, the law has not changed anything because the government has, for years, witheld very important information of interest to citizens, because it marked it as inaccessible and secret, and thus the answers to many questions were not given. Therefore, believes Misini, the law has not fulfilled its purpose.

Misini gave an example of a portal where the government published all laws and proposed laws that have been in the parliaments,  for citizens to react and give their comments. Many people have sent their reaction and were initially happy because they thought Macedonia is a country that allows its r citizens to directly participate in decision-making. But the reality showed that many citizens’ suggestions are not taken into consideration.

“So the direct participation of citizens in making the law remained virtually ‘dead letter’ ‘said Misini.

The opposition in Macedonia has recently started to publish data that were proof that this country has a high level of corruption and that “familiarization of politics” is occuring. Informations about high-level corruption, which in some cases led that laws in parliament were being adopted by just a few people, and that those who have received mandates in fact became machines that followed directives. Also, the ruling party has tripled already a large public administration in this country in order to get support in future elections, considering that every employee of the public administration practically has an obligation to bring out ten members of his family to the election.

The big problem is the corruption of the media in a way that the media is given money for the election campaign, where almost a fifth of the budget was spent on campaigns without ever being justified. There was a semblance of transparency of the campaign in the public eye, as tenders for marketing agencies have been given. However, a major problem was that the funds for broadcasting videos and publishing promotional materials were received only by certain media. 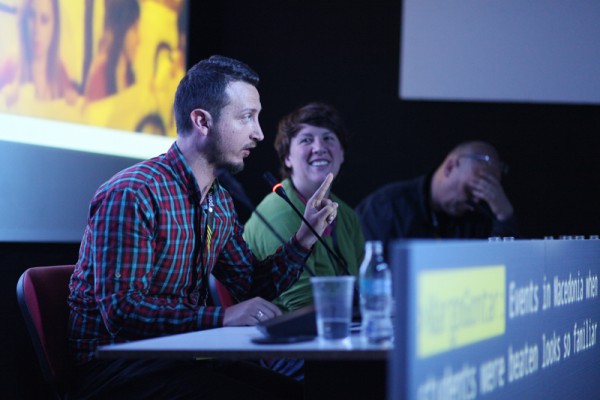 “Macedonia was 34th on the list of countries in terms of respect for press freedom in 2010, and it regressed badly in just a couple of years“, said Bojarovski.

Through legislation governing coalition in Macedonia has made great efforts to investigate and prosecute independent journalists. Five years ago there was a growing number of independent media, but in recent years the situation has changed drastically.

“Every year, 20 million euros is being spent on propaganda of the ruling structures through privileged media,” said Bojarovski, adding that all of these activities, as well as threats against journalists and other critics are constantly ignored by the judicial institutions in this country.

A key event in this country were the recent developments in Kumanovo, which occurred on May 5th, and Biljana Ginova (Come on!), spoke about them on this panel..

Ginova gave intersection of recent history of civic organization in Macedonia that commenced on 28th March 2009.  and which aimed at protecting the city of Skopje from Skopje 2014 project. Some activists and students were beaten by opponents during the protest, all of which, said Ginova, happened in the presence of a large number of police officers.

“They then began the oppression of freedom of speech in Macedonia,” said Ginova. “Even then, the politics were taken away from citizens and moved only in the hands of politicians.”

Ginova was included, as she said, “street activism” through the campaign “Stop police brutality” in 2011, and then the platform Come on was established. The platform is rapidly growing as a result of continuous calls to people to get involved in its work through several organized sections that dealt with differed aspects from the conditions in the health sector to freedom of speech.

“The media themselves have played a role in the suppression of media freedom through spreading a lot of propaganda, and thus the platform Come on remained one of the few bastions of freedom,” said Ginova. 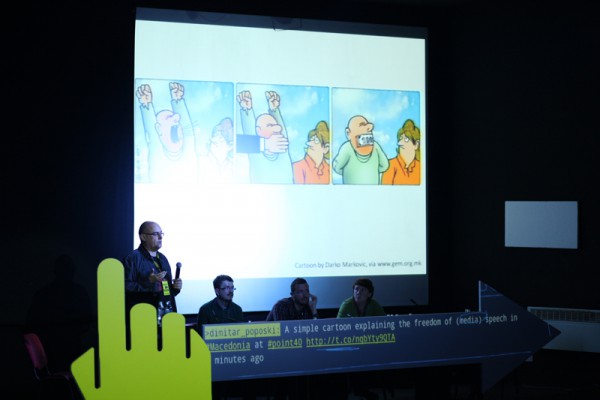 Giorgi Pulevski spoke about the activities of the student plenum, and he gave his view of the situation when it comes to police brutality.

“The government had been anxious not for the fact that the police killed a teenager on the street, but because they have not been able to hide it from the public,” said Pulevski.

Protests in Skopje continue to occur, and so after the events in Kumanovo and protests that brought together about 50.000 participants, a group of people and remained  camped in front of the Government maintaining public discussions and other activities aimed at involving citizens.

Pulevski talked about student plenum as an organization that brings together students and in which they have an equal right to vote.

The first battle of the plenum was the government’s decision on the external testing, or two external examinations through which the students should go outside the universities and inside political institutions.

“External exams undermine freedom of university autonomy without  governing structure’s response to questions of what it had previously been wrong with the system of education,” said Pulevski.

The first protests were successful after which attempts to demonize the protests and students in order to discredit them as foreign mercenaries occurred.

The authorities did not want to negotiate with the students, and the prime minister said that he can not talk to 11,000 people who have no leader.

“Third protests were massive and the Prime Minister recognized that students are dangerous. In a session held at 3 o’clock in the morning they adopted a law on the external exams, “said Pulevski.

Occupation of the University began shortly after that. Students have been working on developing its own program of education through everyday discussions and debates, and on 10th day the occupation has spread to all faculties in Skopje, and on the 15th day they began drafting a new law.

Finally, Pulevski identified three things that were crucial and that have shown a positive impact of work Plenum has been doing: