What decided the outcome of the US elections and why so many failed to foresee it – these are the questions widely discussed ever since November 8th. 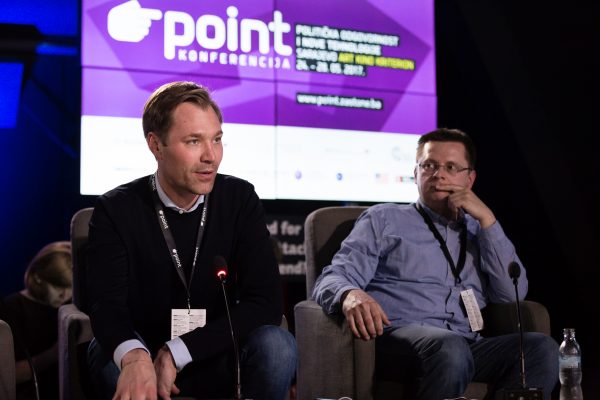 We opened them up with Dejan Vinković (Oraclum Intelligence System Ltd.) and Julius van de Laar (digital campaign strategist) on the panel dedicated to the US elections, moderated by Tijana Cvjetićanin (CA “Why not”).

Julius opened with emphasizing the significance of available data for the election campaigns, and how it should be used to target the right voters to address.

Dejan, who is an astrophysicist by vocation, presented his start-up, Oraclum Intelligence System, which uses scientific methods to make accurate predictions, such as those of the results of US Elections, “Brexit”, or elections in Croatia. He said that during “Brexit” they the variations of the “BASON” method (Bayesian Adjusted Social Network Survey), coming up with the one that gave only 1% deviation. The questionnaire was conducted online, on a very small sample, but the key was to ask people’s opinions on what other people think or might do in the elections or the referendum (“wisdom of crowds” approach), to get more accurate results than the standard polls. The same method was used to accurately calculate the US elections outcome, missed by most of the other polls based on the “systemic underestimation” of Trump, as Dejan explained.

During the discussion, Julius opened the topic of “Cambridge Analytica”, the British company which uses “psychographics” (pairing “big data” containing people’s digital footprints with their personal traits) and is said to have been instrumental in both the UK “Vote Leave” and Donald Trump’s election campaign. He feels that this was not the case and that Trump won because he ran a better campaign and because Hillary Clinton was a bad candidate, who failed to address the “email scandal”, which was the key issue hampering her campaign.

Dejan pointed out that the “Trump phenomenon” wasn’t really that surprising, as it could be seen coming for the past ten years, since we are now witnessing an end of a political era and a beginning of another. He stressed that traditional ideological categories no longer apply and that we need to learn to think more in terms of open vs. closed societies, than in terms of “left” and “right”.