Since the beginning of the pandemic, human rights and freedom of speech came under scrutiny when countries started imposing COVID-19 related restrictive measures and when the vaccines became available. Pandemic and lockdowns also impacted the quality of life of marginalized groups and the increase of domestic violence cases. 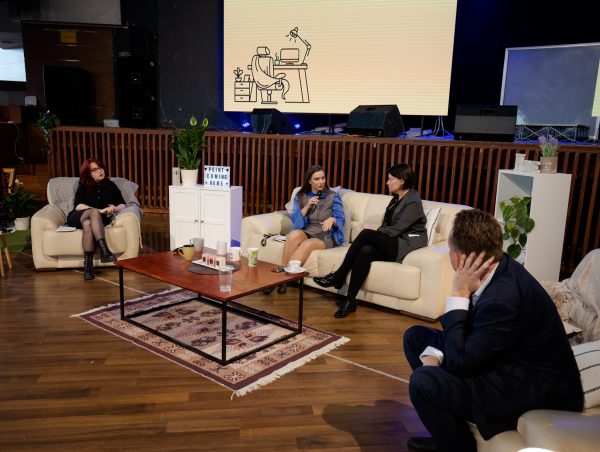 What are the risks that pandemics hold for human rights? Where can we draw a line between protecting individual rights and protecting the community as a whole? Those were the opening questions of the second session of Point 9.0. The first one to answer them was Goran Miletić from Civil Rights Defenders, the organisation that researched what is happening with human rights during the pandemic.

Miletić has pointed out that governments want less accountability in the pandemic era, not just in developing countries but also in developed democracies like Sweden. In that country, centralised government has tried to shift responsibility for large numbers of deaths to the local level of government.

Miletić also pointed out that in the Balkan region, people are looking at things black and white. He underlined this with his experience when journalists ask him questions like “is the government allowed to impose vaccines or lockdown” and when they expect a yes or a no answer. He explained that the answer is not black and white and that proportionality is a very important topic. Was it proportional or not?

Goran also said that it is hard to find any human right that is not affected by the pandemic. Tamara Pavasović Trošt shed light on that statement when she spoke about the sociological aspects of pandemics and how relationships with people have changed.

As an Associate Professor of Sociology at the School of Economics and Business and holder of Ph.D. in Sociology from Harvard University, she pointed out several impacts on human rights from a sociological standpoint.

Social isolation had a significant impact on children, teenagers, and the elderly. People had extensive time alone on the internet, only seeing posts of similar people’s opinions selected by algorithms. However, isolation was not the only issue. Access to digital services, which became basic services, during the pandemic was also challenging.

Tamara pointed out that for students in Slovenia to have exams, they had to have two phones and a computer online, and many people don’t have that. When the basic services moved online, it was necessary to ensure that everyone had access to them, which was not the case.

Tamara talked about another major issue which was freedom of movement in relation to vaccines and Covid passes. She asked if the government has the right to deny people to cross the border to visit sick parents in another country. The vaccine people take can limit which country they can visit.

“The human rights issue is that everyone in society has to have a way to participate equally. You can’t give some people more access, and not others,” Tamara Pavasović Trošt concluded.

Guests of the panel were members of the House of Representatives of the Parliament of the Federation of Bosnia and Herzegovina, Irfan Čengić and Lana Prlić.

Čengić talked about hate speech in public space. He made an initiative in the House of Representatives that the internet should also be considered the public space, and those who spread hate speech must face consequences of their actions.

Parliamentarian Lana Prlić has experienced online harassment and hate speech for publishing a photo of receiving her second dose of the Covid-19 shot and inviting people to get vaccinated.

Feminist activist Adelina Tërshani talked about practical initiatives when it came to protesting during the pandemic in Kosovo. They protested from balconies against the impending fall of the Kosovo government during the pandemic. They also spray-painted red dots 1,5 meters apart in the main Prishtina square to provide the space for protesters and safely be in line with Covid-19 measures. Different groups used that space while protesting for their own issues. The political parties also used the space for their rallies.

Activists had an online campaign for a visa liberalization regime for Kosovo using pandemic isolation as a backdrop to highlight travel isolation that people from Kosovo face.

Amila Husić, a law graduate and a human rights activist, talked about imposed mandates in the Federation of Bosnia and Herzegovina, which the Supreme court overruled. One of those was a ban on leaving the house for minors and seniors. She pointed out that the government imposed those measures without even thinking about the repercussions or amending them to be more livable. A lot of the measures were being put out without context, which made people very confused.

Amila also mentioned a short-lived but still controversial institutional ban on fake news in Republika Srpska. After overturning the provision, official documents regarding that decision were deleted from all government websites.

The audience was also involved in the session. A Polish journalist commented that we shouldn’t turn a blind eye to police using repressive measures and overstepping their boundaries when the anti-vaccination movement protested.

A participant of the conference Azra Berbić from Youth center Kvart commented on an initiative by Irfan Čengić on hate speech, thus claiming that that proposition would apply only to public figures. She gave an example that even activists and journalists who find themselves the targets of hate speech and harassment can count on their own communities to create public pressure, even when the police won’t do anything. But, an individual can’t rely on institutions or that sort of community for support.