The third day of the Point Conference 2016 started with six very motivating stories from the Balkans. All six stories are about young people and the way they are trying to be active and influence changes in their societies. 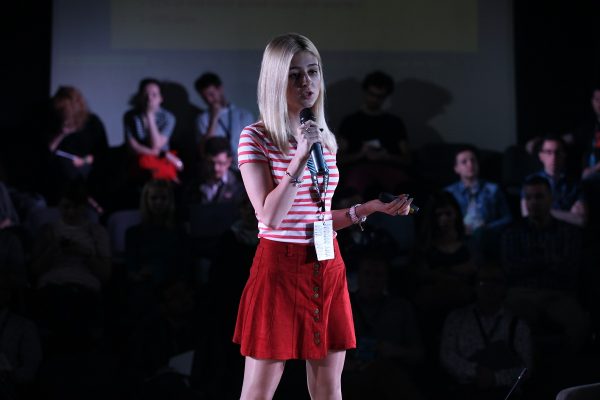 Dea Mulolli from Kosovo presented her organization Peer Educators Network. The Network aims to make young people more political, but also to promote equality in the society. They have their representatives in 29 cities around Kosovo. Part of their activities is the project Youth Engagement in Political and Electoral Process (YEPEEP), which they started last year.

Predrag Blagojević spoke about Južne vesti (“Southern news”), the info project from the south of Serbia. Južne vesti are trying to inform citizens about the issues of public interest. Mostly young people are involved with the project, and Predrag (35) is the oldest one. The project is much more than an info portal. They take an active role in monitoring local public officials and engaging in several projects with other organizations, resulting in groundbreaking stories and even court cases against public officials. The idea behind the project is that only informed citizens can make achange.

Aleksandar Đekić came from Bečej Youth Association. One of the projects they do is a web portal Moj Bečej (“My Bečej”), dedicated to promoting public interest and fight against corruption at the local level. Since 2011, they joined the coalition Oversight of Public Finances, resulting in an investigation about the misuse of 416.000 Euros of public money.  Over the years, with all the difficulties they face on a daily basis, they managed to uncover an entire chain of corruption on the local level, raise awareness and shift the public discourse toward the fight against corruption and bad governance. They also monitor elections.

Zlatko Sofović presented the satirical website karAKTer, based in Sarajevo. After several years of online activities and street actions, the small team of students in Sarajevo decided to launch the very first satirical portal in Bosnia. Their motivation is that activism can change the society, and using satire can help to engage more people. With that idea, on April 1, 2016, this group staged a “government protest” in the front of the state institutions in Sarajevo, chanting slogans in support of their work like “Vlado legendo!” (Government, the legendary!). Next step for this small group is the creation of a satirical game Vlastopol that should be promoted in September with street performances. As Zlatko explained, the main characters of the game are presidents of major parties in Bosnia. Finally, Sead Halilović presented the Initiative for Borik from Banjaluka, which promotes street activism and active role of citizens in dealing with the issues of public interest.