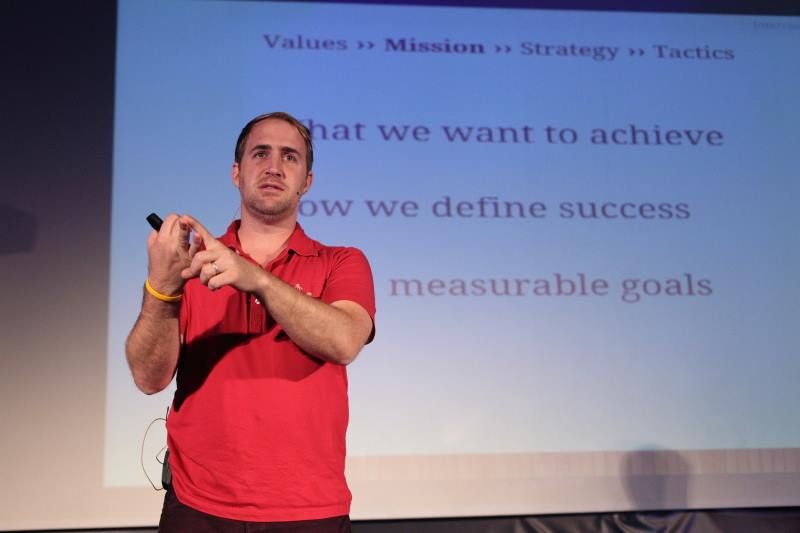 The campaign of Barack Obama, as the first election campaign that took advantage of new media, was mentioned a lot in the media over the past several years and also on the previous POINT conferences, and this year we had the opportunity to meet the man who was the leader of this campaign. Michael Slaby, the technology leader in Barack Obama campaigns in 2008 and 2012 year, in his presentation at the POINT 3.0 conference talked about the use of technology in the conduct of the election campaign for the U.S. presidency.

At the beginning of his presentation Slaby is explained that in the last decade a fragmentation of media happened, primarily due to the advent of Internet portals, blogs and social media, and compared to the 90s, when there were only traditional advertising channels, today wecomplete fragmentation of these channels into the whole network of available tools. During this period there have certainly been a change in the role of media and journalism, where journalism used new technologies to revive itself.

According to him, the fragmentation of the media that occurred in the last decade is important, but more important is the interconnection between media that is happening now.
“Earlier they used only the traditional channels to reach the target audience. There was a clear hierarchy and way of communication. In traditional campaign if we made a TV ad, it would be broadcasted only on TV, while these ads are mainly watched on Youtube today, “said Slaby.

But even today there is a large number of networks that can be used in campaigns and it’s only logical to question their usage, and according to Slaby, we should not forget that in the beginning the most important question is to ask yourself what kind of message we want to send.

“First we must have a clear idea of ​​ourselves and on that we have to build the campaign and its guidelines,” says Slaby.
The visibility of the campaign according to him is not a success in itself, and if you do not have a clear strategic guidance in the end you’ll be unsuccessful.

“Given that in a networked world today information flows very quickly, we have to make quick strategic decisions. When we do this, then we can start thinking about social networks like Facebook and Twitter, and especially the online – offline route in order to strengthen the community “, Explained Slaby.

With the help of social media in the 2008 campaign, people who did not engage in politics nor were interested too much in it joined the campaign as volunteers and eventually as voters.

“If we want new people in a campaign, we must seek new methods. We entered into innovation because of political necessity. In the campaign, we need to think how to raise money, how to engage people and what message to send them and how to get more votes. These are the three key issues in the campaign: money – message – mobilization, “said Slaby, adding that this is why it is necessary to define key messages before thinking about tactics.

Although it’s easier to reach out to voters and give them a clear and precise message with more information with the help of new technologies, it is important to be in the offline world, work action from door to door, as want voters to communicate with each other.

“The principle that people are the true owners of the political process is not new, but on the other hand their empowerment through social networks was very important,” says Slaby.

In the presidential campaign of 2012 based on experience from previous campaigns, there was plenty of time to plan and develop new tools, but the basis in fact remained the same – “to get more votes than the other candidates.”

In the 2012 campaign with the help from innovation 4.4 million was raised, 2.2 million volunteers were actively involved, more than 150 million personal contacts with voters were generated, which ultimately resulted in winning 66 million votes of citizens and 332 Electoral votes.

This success was contributed by the increasing use of applications on mobile phones that allowed almost immediate interaction with the target audience.

Slaby finally pointed out that the rapid development of technology will certainly influence the next campaign.

“If you ask me what will be used in future campaigns, I won’t have an answer to that question” Slaby concluded.