Five years ago, eight countries started an initiative that aimed to bring governance closer to the citizens. Opening data and making it more available makes one of the main principles of the government-citizens relations, since, in the words of former US President Barack Obama, “the governent is there to serve its citizens”. 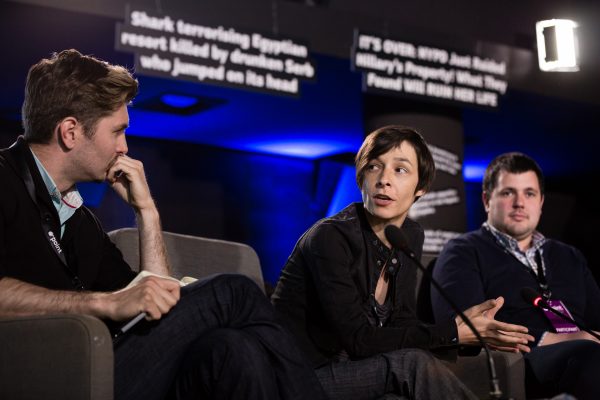 Since we live in the world dominated by fake news and “alternative facts”, it is quite understandable that citizens’ trust in the government is decreasing. Sandra Pernar talked about how this problem could be tackled. She feels that Croatian government has done a lot regarding opennes to the citizens since 2015, but she is not entirely satisfied with the results, as there is still a lot left to be done. The government’s main goal is to include an icreasing number of citizens in e-consultations, so that people who don’t live in Zagreb and other major cities, could also speak their mind on the acts of the government. Last year (2016), the number of consultations rose by 6% compared to 2015, with 642 consultations held alltogether.

Jelena Berković (GONG) talked about the OGP in Croatia from the perspective of the nongovernmental sector, which is a corrective mechanism to the government and plays a sort of “devil’s advocate”. According to Jelena, Croatia has fairly good practice when it comes to freedom of access to information and consultations with the citizens. Thanks to the civil society organizations, the right to access to information became one of the constitutional rights. As another positive example, she mentioned the fact that every law has to go through the process of e-consultations before entering the parliamentary procedure. However, problems arise when it comes to implementing the laws. For example, tax reform in 2016 was conducted without any consultations with the public, which is particularly troubling in the light of the fact that the minister in charge of the process used to be a manager in a private company “Agrokor”. This points to a possibility that, in outlining tax reform, he could have his former employer’s interests in mind, rather than that of the public. Jelena put the strongest emphasis on the need for the citizens to keep pushing the government to be more open and transparent.

It is not widely known that Serbia has the second best Law on free access to information in the world. However, according to Ivan Radojević, the situation in the field is far less praise-worthy. The problem is in the fact that bodies charged with implementing the law, simply don’t have enough authoity and depend heavily on the government. CRTA, as one of the most active NGOs in Serbia, is planning to create a platform which would make it easier for the citizens to file FOI requests to the institutions. One of the problems is the “snatching” of the process by the government, since neither citizens nor the civil society are included in the process enough.

The last presentation was given by Elvira Mujkić from Transparency International BiH, who said that proactive transparency in Bosnia and Herzegovina is on a very low level. The government in BiH still hasn’t adopted an action plan to implement the OGP, although this obligation stands for two years already. The main problem is that the citizens are not sufficiently familiar with the legislative process, which the government finds quite convenient, as it has no real interest to include them in the legislative processes. The start of the practice of creating “Citizens’ budgets” was pointed out as a good example; however, this is still happening mostly on local level. On the other hand, Elvira thinks that local level is where the change of consciousness has to start anyway, since it will most likely not come from the top level of government.

Although this panel presented us with different angles on the subject, there was one thing that all panelists could agree on: the citizens have to make the government include them in this process on all levels.