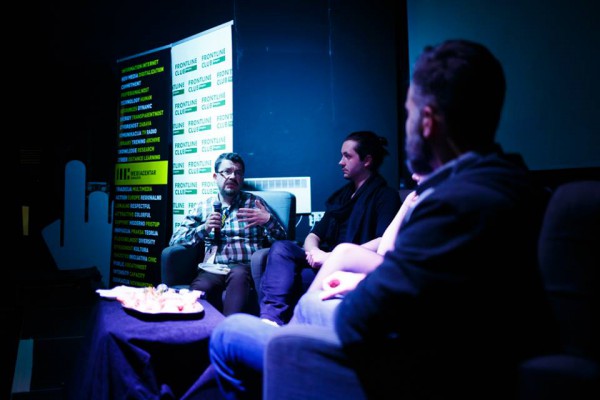 Tin Geber had the honor of moderating the last panel of this year’s POINT. This panel was probably the first one in the history of these conferences where food was served both to the panel and the audience. Security and privacy on the internet was the topic of the panel, and panelists were: Alex Krasodomski Jones (CASM) , Rita Zágoni (Hungarian Civil Liberties Union (HCLU)) and Filip Stojanovski (Metamorphosis).

Rita said an interesting fact that Vodafone received 76.000 requests for user personal data and metadata (not counting the requests made by secret services) in the period of April 2013 – April 2014.

Alex finds it a litle bit confusin as to why do the governments need all that data, what’s the use for it. He also pointed out that this is a battle between of capability and accountability. On one hand, we have the government who wants to increase its capability of surveilancing, and decrease citizen’s right to privacy, and on the other hand we have crypthographers who want to do the opposite. In his opinion, the key is actually in accountability, the government has to be more accountable for what it does while conducting surveilance.

Unlike the other panelists, Filip said that unfortunately they know why and how their government is surveying them, and that they have the evidence they are doing it illegaly. He pointed out that legislation in Macedonia was good until 2010, when they made changes to the law which enabled the government to get private information of users of telephone companies. These changes have been overturned at the Constitutional Court of Macedonia. In February this year it was discovered (by the opposition) that the Macedonian authorities illegally wiretapped citizens of this country, and the struggle between protesters and authorities is still ongoing.